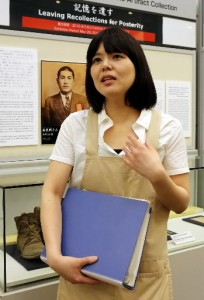 Personal effects left behind by four A-bomb victims are on display in exhibition cases in the east wing of the Peace Memorial Museum in Naka Ward. This exhibition, now taking place, features artifacts from the museum’s collection, including a tattered blouse that was worn by a 17-year-old girl who loved fashion. A week before the atomic bombing, a portrait was taken of the girl after her hair was permed. The A-bomb attack, though, left her with severe burns to her face and body. “If I continue to be part of this family, while looking so ghastly, Hisao (her younger brother) will never be able to get married. I have to die for their sake.” So saying with her last words, the girl passed away, suffering from pain until the final moment of her life.

“Every item left behind by the victims conveys to us the ‘life’ and ‘death’ of people who really weren’t much different from us today,” said Kayo Takahashi, 32, a resident of nearby Kaita. Ms. Takahashi is the curator of this exhibition, who made plans for it while speaking to family members of the victims. “How best to communicate the thoughts of the victims and their families is always on my mind,” she said.

Ms. Takahashi has been working at the Peace Memorial Museum since 2008, as one of seven curators. Her primary responsibility is accepting and storing materials related to the atomic bombing. Because history had been a longtime passion, serving as a museum curator was the work she eagerly desired. “And, more than anything, I wanted to work at this museum,” she said.

The urgency of her work

Ms. Takahashi was born and raised in Kaita. While growing up, she listened to the experiences of A-bomb survivors, including the accounts of her grandfather and other relatives. She thought she was knowledgeable about the bombing, but after she began studying history as a university student in Kyoto, she came to realize how little about it she actually knew. In order to learn more about the atomic bombing, she hoped to take part in a practical internship on curating at the Peace Memorial Museum. Although her request was turned down by the museum due to its busy schedule, she asked again and again, by telephone and letter, and finally was able to undertake a short internship of about two weeks. After graduating from her university, she worked part-time at an archaeological dig while waiting for the opportunity to be hired as a curator at the museum.

Seven years have passed since she realized this dream. “But I know I’m still just a novice,” she admitted. In her work, she has met a person whose eyes turned teary and, with a trembling voice, talked about the day of the bombing; and another who had promised an interview about an item left behind by a victim, but could not keep that promise, saying, “It’s still too hard for me.” She struggled to find the words for this victim’s family, because no matter how much time has passed, their pain has not eased; instead, it has deepened. She worried that her words could aggravate their emotional wounds.

Still, she was able to overcome this anxiety by recalling the urgency of her work. The number of people donating A-bomb artifacts has been declining after reaching a peak of 137 in fiscal year 2004. In fiscal year 2013, donations came from only 48 people. Because of the change in generations in the victims’ families, there are now more cases where the details of the victims’ personal effects are not known. “I want to leave as many memories of the A-bomb victims as possible to the next generations so that these materials can be utilized even after the A-bomb survivors, the bereaved family members, and we, too, are gone,” Ms. Takahashi said. With this mission in mind, she has stepped up her efforts to communicate with the A-bomb survivors and family members of the victims.

The Hiroshima Peace Memorial Museum is now reviewing the contents of its exhibits as it undertakes a full-scale renovation of the facility, scheduled for completion in spring 2018. As the A-bomb survivors grow older, the significance of the A-bomb artifacts grow, too. However, the museum is only able to display about 500 artifacts out of its total collection of approximately 20,000 items. Although the museum has announced that it will pursue a policy of exhibiting more actual artifacts, an incident took place that made Ms. Takahashi rethink how best to convey the damage caused by the atomic bombing. This involved an effort by citizens to protest the removal of plastic mannequins, used to simulate A-bomb victims, from the museum exhibits.

Ms. Takahashi understood their position, saying, “Some believe that a display which uses mannequins in this way can help visitors comprehend the situation more easily and leave them with a stronger impression. I don’t think this can be denied.” At the same time, she offered, “The age range of the visitors, and their sense of values, are also changing with the times. We have to continually seek the most appropriate way of creating displays, and persist in this challenge without fear of change.”

After wrestling with the contents of the exhibition of items from the museum’s collection, she decided to feature the personal effects of four A-bomb victims. She concluded her description of the exhibition by saying, “We truly hope these memories of four people who lost their lives to the atomic bombing will linger in your heart.”