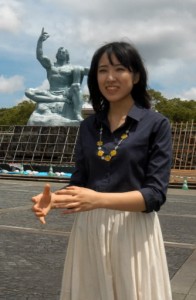 Chisa Nishida, 20, who lives in the city of Nagasaki and is a third-year medical student at Nagasaki University, was raised in Nishi Ward, Hiroshima and set her eye on Nagasaki to pursue her career path. “I now consider both cities my hometown,” she said. A view of the Nagasaki Peace Park, located on a hill near the Nagasaki University campus, has become a familiar sight. From these two A-bombed cities, she has been making efforts to convey a plainspoken message for peace and a world free of nuclear weapons to people in Japan and abroad.

On May 16, Ms. Nishida took part in the first meeting of a committee working to draft Nagasaki’s Peace Declaration, which will be read out by Nagasaki Mayor Tomihisa Taue at the Peace Memorial Ceremony on August 9. She was the youngest of the 15 committee members, with others including A-bomb survivors and influential figures. At the meeting, the suggestion to add a direct reference about the new security bills being pursued by the Japanese government was made several times by committee members. Ms Nishida agreed with this idea and made a further recommendation, saying, “The declaration should also urge young people to see the security bills as an issue that affects them personally.”

“These issues affect us, too”

To the young people of her generation who view the atomic bombings and wars as things that have happened long ago and far away, Ms. Nishida said, “I want them to be aware that these things aren’t just other people’s problems; these issues affect us, too.” At first, she felt she should decline the invitation to become a committee member because of the great responsibility it entailed, but she finally accepted, thinking the voice of younger people should also be reflected in the declaration. In representing her generation, she believed she was able to make frank comments within the committee.

During her days as a junior high and high school student in Hiroshima, she felt a little frustrated as she pursued activities involving the atomic bombing and peace. With an interest in international politics, she became a junior writer for the Chugoku Shimbun when she entered her third year of junior high school. In this role she had the opportunity to interview atomic bomb survivors and experts from Japan and overseas, while learning about issues involving nuclear disarmament. Meanwhile, schoolmates made comments about her activities like “You’re so serious” and “You’re really conscientious.” Such remarks didn’t please her, though, because she felt she was being viewed as someone “special.”

Ms. Nishida was pulled to Nagasaki when, in 2011, she saw a news report on the accident at the Fukushima Daiichi (No. 1) nuclear power plant. A girl was crying, saying, “I won’t be able to have a baby in the future.” The girl’s anxiety, and the discrimination she faced over radiation fears, reminded her of the A-bomb survivors she had met in the past. To learn about radiation and become a doctor who can do work globally, she felt moved to study in the medical faculty of Nagasaki University, which includes an institute researching A-bomb-related diseases.

Since becoming a university student, she has continued her involvement in peace activities despite busy days attending lectures and writing reports. For two consecutive years she has visited the United States as a member of the Nagasaki Youth Delegation. This past May, she gave a presentation in English to an audience of young people from around the world at United Nations headquarters in New York, where the Review Conference of the Nuclear Non-proliferation Treaty (NPT) was taking place.

She experienced exciting exchanges in New York. When nuclear disarmament is discussed in Japan, she said, the mood turns gloomy, but such discussions with students from the United States and Italy were much more upbeat. Peace activities overseas, with the participants sharing their efforts online and asking friends to take part, seem to have a more informal spirit. “Peace education in Japan doesn’t cover current nuclear conditions in the world. That’s why young people here are less apt to think of these issues as their own concerns,” she reasoned.

When she first became a university student, Ms. Nishida was so busy settling into her new life that she couldn’t continue her peace activities for a while. During this time, she attended the Peace Memorial Ceremony in Nagasaki for the first time on August 9, 2013. As she listened to Mayor Taue’s Peace Declaration, one line, directed at young people, resonated strongly: “It is you who will determine the future of this world.”

On July 11, 2015, at the final meeting of the committee charged with drafting the Peace Declaration, Ms. Nishida made an appeal to maintain a certain phrase in the declaration, which was accepted. The phrase was “together with Hiroshima,” included in a section which pledges to take action to realize a world free of nuclear weapons. “I’m not someone special among young people, nor a girl fated to represent the A-bombed cities,” she said. Still, she hopes to serve as a bridge to help link the efforts of Hiroshima and Nagasaki.