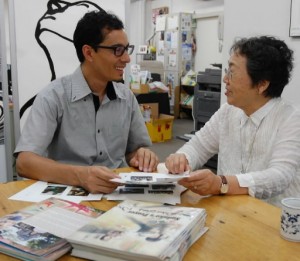 Shamsul Hadi Shams, 31, a resident of the city of Higashihiroshima, works for the Hiroshima Office of the United Nations Institute for Training and Research (UNITAR) and seeks to lift the future of his devastated homeland of Afghanistan from the A-bombed city of Hiroshima. From the office where he works, Mr. Shams can look out on the A-bomb Dome in Naka Ward. For 70 years since that fateful day, the dome, a symbol of Hiroshima, has continued to provide silent testimony to the destruction of the city. “Hiroshima was able to recover from such terrible damage caused by the atomic bombing, and this gives us great encouragement. It helps us believe we can do the same in Afghanistan.”

Listening to the accounts of A-bomb survivors

UNITAR has pursued a training program for Afghan government officials, lasting six to eight months and held every year since 2003, to help improve their skills in policy-making and the development of human resources. Mr. Shams is one of the staff members overseeing this program. A roughly ten-day schedule in Hiroshima provides opportunities for the participants to visit the Cenotaph for the A-bomb Victims and listen to the accounts of A-bomb survivors between lectures. To date, more than 500 people, including senior government officials, have completed this training, creating a network of Afghans inspired by their knowledge of Hiroshima.

Mr. Shams feels a special incentive when it comes to aiding the reconstruction effort in Afghanistan by bringing awareness of Hiroshima to other Afghans because he himself has been impacted by his country’s conflict. When a military coup took place in 1978, his father, who was viewed as siding with the opposition, went into hiding. After troops from the former Soviet Union invaded Afghanistan in 1979, his family fled to Pakistan, where Mr. Shams was born as the seventh child in 1984. One of his brothers became a “freedom fighter” (mujahideen) and was killed in the war in 1989.

After the Soviet Union withdrew its troops, Afghanistan suffered civil war and an invasion by the U.S. military in the wake of the September 11 terrorist attacks in 2001. Mr. Shams wondered what he might do to help bring peace and stability to his homeland. After pursuing his education under difficult conditions, he came to Japan to attend Hiroshima University’s Graduate School for International Development and Cooperation, located in Higashihiroshima, and studied diligently. Three years ago, he gained a doctorate and asked for the chance to assist UNITAR’s Hiroshima Office.

While engaged in this work, he has come to believe that the atomic bombing, though very different from the damage resulting from conflicts, has much to teach the Afghan people. The A-bomb survivors have set aside their feelings of bitterness and their desire for revenge, and have sought peace instead, a mindset which Mr. Shams sees as essential for Afghans, too, after their experience of intense domestic conflict.

Mr. Shams also translated the picture book Sadako’s Prayer into Afghanistan’s official languages. The book tells the story of Sadako Sasaki, a Japanese girl who developed A-bomb-induced leukemia at the age of 12, ten years after the atomic bombing, and believed that folding paper cranes could cure her radiation-related illness. The original version of the book was jointly created by ANT-Hiroshima, a local non-profit organization, and a Pakistani artist. Mr. Shams said, “There are children in Pakistan who don’t even know what peace means,” so he added a peace message and the A-bomb account of Takako Morii, 79, an A-bomb survivor living in the city of Hatsukaichi. He has a close bond with Ms. Morii, who he refers to as his “mother” in Hiroshima.

With funds of 600,000 yen provided by ANT-Hiroshima and Ms. Morii, Mr. Shams visited elementary schools and junior high schools across Afghanistan, including the capital city of Kabul, with his siblings and friends, and distributed 3,000 books during vacation times last summer and this past June. They drove along narrow mountainside roads to deliver books in mountainous areas.

Some Afghan girls clutched the picture books to their chests. Some boys proudly opened the books, though they weren’t able to read the text. When Mr. Shams handed out books and said they could be taken home, the children’s faces lit up. Unlike the affluence of people’s lives in Japan, a colorful picture book is a blessing in Afghanistan. There is no doubt that these books will be read again and again.

“My power is small,” Mr. Shams said, “but I want to keep sowing seeds of peace through education from Hiroshima to Afghanistan.” In mid-August, he will travel to South Sudan, which split off from the north and became independent after a bitter civil war, to prepare a training program designed to assist with the area’s reconstruction. Of course, he plans to take more picture books with him.