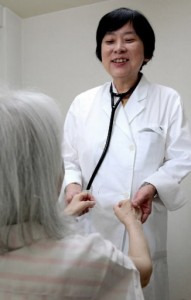 Each day Dr. Keiko Hiyama, 57, sees outpatients in the morning and does her rounds of inpatients in the early afternoon. Currently, four of the 10 inpatients are A-bomb survivors. She smiled when one of the patients told her, “Your grandfather was so kind to me, too.” Dr. Hiyama, director of a clinic located in Minami Ward, Hiroshima, is a second-generation A-bomb survivor. Her mother was exposed to the bomb’s residual radiation while caring for survivors of the atomic attack. Her family has been running this clinic for several generations, and providing medical care for A-bomb survivors.

The first director of the clinic was her grandfather. Though he became a victim of the atomic bombing, he was able to treat the survivors who flooded in after the blast. Her father, Arimitsu Fukuhara, built a ward for inpatients and provided care to local survivors. (Dr. Fukuhara died in 2010 at the age of 81.) Watching her father care for his patients, she decided to become a doctor, too. Dr. Hiyama also looked up to her gentle granduncle, Tomin Harada. Dr. Harada devoted his life to studying and treating the aftereffects of radiation exposure, including keloid scars. (Dr. Harada died in 1999 at the age of 87.)

Researching the genetic effects of radiation on the human body

Dr. Hiyama is the chairperson of a group of doctors who are second-generation survivors of the Hiroshima A-bombing, a subgroup of the Hiroshima City Medical Association. She said, “Our role is to ease the anxiety of survivors and sound the alarm for the next generation about the dangers of nuclear warfare.”

Her mother does not talk much about what happened on the day of the bombing, and Dr. Hiyama has never suffered a serious illness herself. It was after she became a doctor that she began to give greater attention to radiation, which can take a toll on people’s mental and physical health. As a fledgling doctor, she worked for the Radiation Effects Research Foundation. She was assigned to the section studying the genetic effects of radiation on second-generation survivors. As she gained deeper knowledge of the nature of radiation, which can damage DNA and persist in influencing human health, she grew anxious, she said.

She took blood samples from survivors, their spouses, and their children, and compared them at the genetic level with samples from families that have not been affected by radiation. So far, no cause-and-effect relationship has been established between the radiation exposure of parents and their children’s health, which has brought a sense of relief. But at the same time, she thought: “We will learn the conclusive results once a large amount of genetic information can be analyzed. To protect future generations from radiation, we must make our utmost efforts to understand its genetic influence.”

Dr. Hiyama also worked at Hiroshima University Hospital, and then at the university’s Research Institute for Radiation Biology and Medicine. After the sudden death of her father, she became a practitioner but has always had a keen interest in radiation medicine.

Four years ago, a woman brought her small child to Dr. Hiyama’s clinic. The woman fled to her parents’ home in Hiroshima after the accident at the Fukushima No. 1 (Daiichi) nuclear power plant. She was afraid of the effects of radiation exposure, although the government and experts repeatedly said that there would be no immediate effects of radiation exposure on human health. Dr. Hiyama listened to her and referred her to a specialist. But she thought, “Many victims of the accident come to Hiroshima in hopes that doctors in this city will be able to help them. But how many doctors here have both accurate knowledge and an empathetic attitude?”

When the group of doctors who are second-generation survivors was formed in 2013, she negotiated directly with the graduate school of Hiroshima University to allow doctors to attend lectures on radiation medicine. A total of 89 members of the medical association have attended such lectures since the program began in June 2014. She has also organized lectures designed for younger people. Survivors from inside and outside Japan have been invited to give speeches at a hall in Nishi Ward on August 2. She has also been turning books on radiation into DVDs and translating them into English.

“Uncle Tomin” faithfully supported the survivors while making diligent efforts to advance the peace movement with the late American peace activist Barbara Reynolds, giving concrete form to her idea “I, too, am a hibakusha.” Dr. Hiyama empathizes with his spirit. “If we can’t prevent the next nuclear war, it will be the end of the world. Each and every person must act,” she said. As a medical doctor, she conveys a true picture of radiation damage to the next generation and to the world. She runs with a baton that has been passed from her forerunners, who led lives of hardship.

(This article concludes the series “Hiroshima, 70 Years After the Atomic Bombing.”)