Women football players as leaders for recovery and change in Afghanistan 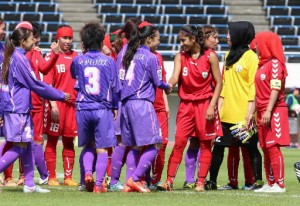 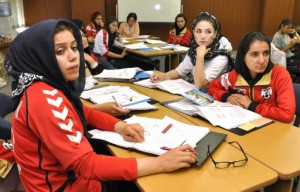 In mid-September, the Afghanistan National Women’s Football Team was invited to Hiroshima by the Hiroshima Office of the United Nations Institute for Training and Research (UNITAR) for its first-ever training in the A-bombed city. The training program was aimed at promoting women’s participation in society through sports and creating a peaceful nation. However, in Afghanistan, a country torn apart by endless civil war and U.S. military intervention, prejudice and discrimination against women still persist. Can a path toward overcoming these conditions be seen? The Chugoku Shimbun followed the members of the Afghan team as they took part in the six-day training program.

“I will be a role model myself,” one player said with conviction during a session on women’s leadership, when asked by the instructor about her role model. Some of the players said that they hope to build peace through football, while others said that they want to prove that women can play the sport, too. Their views were mostly positive and clearly reflected a trailblazing spirit.

The Hiroshima Office of UNITAR launched its training program for Afghanistan in 2003. To date, these trainings have been mostly for male government officials. This time, however, UNITAR invited 15 female football players, the head coach, and four staff members who support the National Women’s Football Team in its dedication to football, the nation’s most popular sport.

Afghanistan has suffered a variety of conflicts and civil wars, including the former Soviet Union’s invasion in 1979 and the U.S. military intervention after the terrorist attacks that took place in the United States in 2001. Now, as the nation undergoes the work of reconstruction, football is able to bring people together. In spite of this, women football players still face adverse conditions.

Subject to harassment and threats

In Afghanistan, women are constrained from appearing in public. Such archaic customs still pervade Afghan society, and it is considered unacceptable for women to play sports. There is strong resistance to the idea of female athletes and they can be subject to stone-throwing, verbal abuse, harassment, and threats. In order to avoid such treatment, players sometimes switch cars two or three times on their way to football practice. Thus, the training environment of the Afghanistan National Women’s Football Team, which was formed just last year, is very unfavorable, and the team is able to train only three days a week, for two hours a day, due to continuing suicide bombings and the general lack of security.

In a friendly match with Ange Violet Hiroshima, a team in the second division of Japan’s “Nadeshiko” Women’s Football League, the Afghan team lost 14-0. The contrast between the Afghan and Japanese players’ abilities was stark. The Afghan team is currently ranked 132nd by FIFA (Fédération Internationale de Football Association), and it has great potential to improve. After the match, Amin Amini, 45, the head coach, said that the team did its best and gaining more experience will be the key to its development. Looking toward the future, she added that they will take back to Afghanistan many things that they learned from the Japanese players, such as their movement and passing as a team.

It can be said that the Afghan football players have already become leaders in their home country by realizing their dream of playing football, commented Asako Osaki, 44, a visiting professor at Kwansei Gakuin University who specializes in the fields of gender and international cooperation. Ms. Osaki is hopeful that the young female football players can give hope to other Afghan women through their efforts while altering men’s perceptions of women and changing Afghan society from the bottom up.

On the final day of the training program, the Afghan football players attended a baseball game of the Hiroshima Toyo Carp, which was formed soon after the atomic bombing and has been a source of encouragement to the people of the city ever since. The Afghan team was inspired by the Carp players, who fought hard to win the game, and by the fans in red attire who cheered on the players from the stands. Frozan Abdul Mahfooz, 21, the captain of the Afghanistan National Women’s Football Team, said that the Carp fans and players are firmly united. Her hope is to strengthen her squad’s teamwork and the understanding of each player’s role so they can bring out the best in their abilities.

Asked about how, as team captain, she envisions helping to develop women’s football in Afghanistan, she answered that she would like to form good women’s football clubs to create an environment where more women can play the sport. To that end, she is unfazed by threats. Can Hiroshima, which recovered from the burnt rubble of the atomic bombing, lend hope to the Afghan people? Hiroshima holds the power to encourage others to overcome adversity as they pursue their dreams. The city, and its citizens, must continue their efforts to support the people of Afghanistan.