Picture-card show created by American girl living in Hiroshima reproduced in book form; images from atomic bombing reflected in story written 60 years ago; testament to ability to relate to Hiroshima 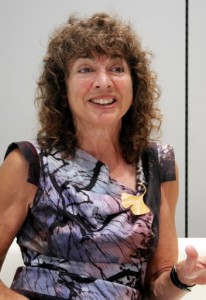 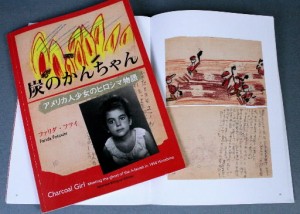 A picture-card story created by a 7-year-old American girl living in Hiroshima in the mid-1950s was reproduced in book form this summer. Farida Fotouhi, 68, now a resident of Los Angeles, wrote “Charcoal Girl: Meeting the Ghost of the A-bomb in 1954 Hiroshima” when the scars of the atomic bombing were still fresh. Written in Japanese, the story makes use of Hiroshima dialect. In addition to her feelings about the atomic bombing, it depicts Ms. Fotouhi’s ties with people in the city.

Ms. Fotouhi, who returned to Hiroshima in conjunction with the publication of the book, noted that the people of the city embraced her warmly less than 10 years after the A-bombing and said that she, in turn, tried to understand them. Her picture-card story, she said, is a testament to that and demonstrates that people can overcome enmity and relate to each other. She said she was pleased that the story was published in the year marking the 70th anniversary of the atomic bombing.

Ms. Fotouhi’s family moved to Hiroshima in 1952 when her father, Abol Fazl Fotouhi, was appointed the first director of the American Culture Center in Hiroshima. The center, which was located in what is now Naka Ward, was established by the United States Department of State. It had a library and screened films and held lectures as part of a public relations effort by the U.S. government. (The facility closed in 1971.)

In accordance with the wishes of her parents, who wanted their only child to be a young ambassador for the U.S. too, Ms. Fotouhi attended the now-defunct Higashi Senda Elementary School affiliated with Hiroshima University. While sometimes bewildered by differences in customs, Ms. Fotouhi worked hard to learn Japanese. She created her picture-card show in 1954 while in the second grade.

The main character in her story is an oak tree named Kan-chan. Kan-chan stands next to her mother and plays with children. Then one day Kan-chan and her mother are cut down to make charcoal. The trees try to resist, crying “bakayaro” (stupid idiot) with an American accent. But they are turned into charcoal and sold. As the charcoal around her in the brazier grows white, Kan-chan clings to her mother and says, “I’m crumbling.”

Last year Ms. Fotouhi came across her picture-card story at her Los Angeles home among materials her mother had saved. It was the first time she had seen it in 60 years. She said the image of Kan-chan surrounded by flames clearly reflected her image of the atomic bombing. Though only a child then, she believes the story allowed her to put down her feelings of guilt as an American.

Minami Ward resident Atsushi Hada, 68, was a childhood friend of Ms. Fotouhi’s who lived in the same neighborhood, and the two have remained friends over the years. Describing his feelings when he first learned of the picture-card show, he said, “She was such a cheerful girl. I feel like I’ve gained an insight into her feelings for the first time.” As a boy, Mr. Hada, whose mother and elder sister were injured in the atomic bombing, was like a member of Ms. Fotouhi’s family. Ms. Fotouhi said the Hada family did not choose to talk to her about the A-bombing, but because children are sensitive she sensed what they left unsaid.

Reference to nuclear accident in Fukushima

The book containing the picture-card story also includes a memoir that was previously published in the U.S. and a newly written essay, all in a bilingual format. The essay includes a reference to the shock Ms. Fotouhi felt at the time of the 2011 accident at the Fukushima No. 1 (Daiichi) nuclear power plant. Her father, whose mission was to improve sentiment toward the U.S., worked hard to ensure the success of the 1956 Atoms for Peace Exhibition. The anti-nuclear movement had gained momentum with the Daigo Fukuryu Maru (Lucky Dragon No. 5) incident in 1954, and Mr. Fotouhi had the task of working to prevent this from leading to an anti-American movement.

“The Fukushima disaster made me recall my family's involvement in the Atoms for Peace exhibit,” Ms. Fotouhi wrote. She noted that the exhibit “came to Hiroshima on the wave of naive 1950s optimism about the power of technology, including nuclear power, to transform the world.”

Ms. Fotouhi left Japan in April 1957 when her father was transferred. The family subsequently lived in Brazil and Nigeria, where her father was posted, but she said she thinks of Hiroshima as her “second home.” The president of an advertising agency, Ms. Fotouhi still takes time out from her busy schedule to return to Hiroshima for class reunions and other events and puts her Hiroshima dialect to use.

She said that her book represents a call for peace and noted that Hiroshima tells not only of the horrors of the atomic bomb and radiation but also of the possibility of mutual understanding between people. The 77-page, B5-size book is on sale for 1,500 yen via the Internet and in some bookstores in Hiroshima.