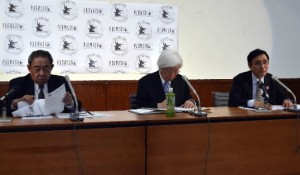 On October 16 Pugwash Japan, the organizing committee for the 61st Pugwash Conference on Science and World Affairs, announced the participants and agenda for the event, which will be held in Nagasaki November 1-5. The Pugwash Conference is an organization of scientists working to eliminate nuclear arms. About 190 scientists, disarmament authorities and others from 40 countries, including the United States and Russia, both nuclear powers, are scheduled to discuss the inhumanity of nuclear weapons and concrete measures for nuclear disarmament. This is the first time the conference will be held in Japan since it took place in Hiroshima in 2005.

Following an opening ceremony on the first day, three plenary sessions will be held at Nagasaki University. At the session on “The Path to Nuclear Abolition,” Anita Friedt, Principal Deputy Assistant Secretary of the Bureau of Arms Control Verification and Compliance of the U.S. Department of State, and Mikhail Ulyanov, Director of the Department of Non-Proliferation and Arms Control in Russia’s Ministry of Foreign Affairs, will participate in an open forum.

The topic of discussion on November 2 will be “The Nuclear Risk in South Asia.” On November 3 participants will discuss the “The Risks of the Peaceful Use of Nuclear Energy.” The nuclear agreement signed by Iran with six world powers will be taken up on November 4, and Prof. Ali Akbar Salehi, vice president of Iran and head of the nation’s Atomic Energy Organization, will speak. The conference will close on November 5 following the announcement of a Nagasaki Declaration aimed at a world without nuclear weapons.

Tatsujiro Suzuki, director of the Research Center for Nuclear Weapons Abolition at Nagasaki University and chair of Pugwash Japan, and two others held a press conference in Tokyo on October 16. Mr. Suzuki said that replicas of the Nobel Peace Prize medal awarded to the Pugwash Conference in 1995 will be presented to the cities of Hiroshima and Nagasaki during the conference’s opening ceremony in recognition of their efforts, including the recounting of their experiences by A-bomb survivors.

“I hope there will be lively debate among the scientists, and I would like to prepare a Nagasaki Declaration that reflects the sentiments of the people of Nagasaki,” Mr. Suzuki said.