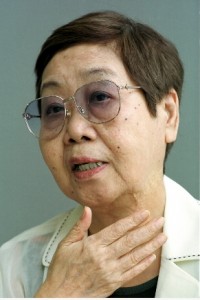 Part 1: Lingering trauma reflected in the words “the spring of life”

Because of my A-bomb experience, I also suffered discrimination. If someone says my painful experience of that time was “the spring of my life,” I guess that would be the end of the story. But it’s hard for me to accept. When I went out, I used to cover my head with a scarf and I would hide the keloid scars on my neck with my right hand. Still, children taunted me with cruel names like “monster” and “baldy.” Even when I went to the hospital, I took back alleys.

Ms. Yoneda was 16 at the time of the atomic bombing, a student at Gion Girls’ High School (now Gion High School). She was exposed to the blast while at the post office in front of Hiroshima Station, where she had been mobilized for the war effort. She suffered burns on the left side of her body, from head to toe. Because the bomb stole away her parents, she was taken in by her grandparents, who lived in the city of Shobara in Hiroshima Prefecture.

The scars from my burns were raised on my skin. A large keloid formed on my neck, and I couldn’t turn my head from side to side. My lips were twisted, and food spilled from my mouth. My hair fell out, too. Four years after the atomic bomb, I went to live with my brother-in-law in the city of Hiroshima. Even then, when a child approached me at a public bath, the mother would say something like, “Don’t go near her, or you’ll catch her disease.” I was at an age when a girl was conscious of her appearance, and this was very painful.

The following year, thanks to the kindness of a doctor at the Hiroshima Red Cross Hospital, where Ms. Yoneda was receiving treatment, she underwent surgery without charge. Her keloid scars were then less obvious to the eye.

A friend of mine was suffering a similar, painful experience. Because of the blast, her face was hit by many fragments of flying glass. Her scars looked like tattoos. One day I visited her, after she got married, and found her husband eating alone. “It’s always like this,” she told me. It seems her husband said to her, almost daily, “Looking at your face ruins my appetite.” When I heard this, I felt the same pain, as if the words had been directed at me.

I haven’t talked much about my marriage, but I got married myself at the age of 40, and left Hiroshima for 13 years. After I got married, and moved to another place, my new neighbors saw my scars and asked me what had happened. When I mentioned the atomic bombing, one person said, “It’s amazing that someone would marry you.”

Six years ago, Ms. Yoneda developed a kidney ailment, and she now visits the hospital three times a week to undergo dialysis treatment.

I’ve stopped sharing my A-bomb account with students visiting Hiroshima on school trips, though I guess I’m part of the last generation who can still talk properly about the experience.

If I’m asked which scars inflicted by the atomic bombing have been more painful, the visible or the invisible scars, I would say the invisible ones. Even decades after the bombing, when I sit at a cafe, I’ll take a seat where the left side of my body, burned by the blast, is not exposed to people’s eyes. I do the same on the train, too. The instant I step into a place, I choose the best spot to conceal my body. I’ve faced hard times for so long, you know. It’s all part of the trauma I’ve been through.