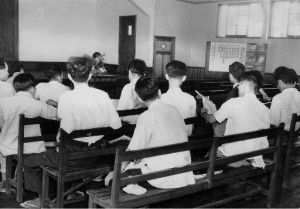 ▽Why not all the survivors?

Nine Hiroshima Maidens went to Tokyo and received medical examinations and treatment for their keloid scars free of charge. When I heard the news, I cried out of frustration. “Those nine girls are not the only A-bomb survivors. Why can’t all the survivors receive such treatment? I’m an A-bomb survivor, too.”

“Hiroshima Maidens” was a term used broadly to describe young women who were suffering from the aftereffects of the atomic bombing. Many were in distress, especially due to the keloids that formed on the scars from their burns. The nine Hiroshima Maidens went to Tokyo in 1952 and their trip was featured prominently in newspapers and through other media.

Kiyoshi Kikkawa, an A-bomb survivor I met during my stay at Hiroshima Red Cross Hospital, told me, “You cried tears of chagrin, didn’t you? Spit out your feelings to as many people as you can. It will help result in a law that provides support for A-bomb survivors.” His words hit me hard. I had been living like I was holding my breath. Mr. Kikkawa urged me to gather signatures from A-bomb survivors, even the names of only one or two people, and I set out to try.

I asked my neighbors or people on the street whether they had experienced the atomic bombing. As a survivor myself, I know how tough it is to be singled out by others, so I genuinely hated to ask A-bomb survivors this question. Some people berated me, saying that I was trying to take advantage of my A-bomb experience.

▽Gaining trust by exposing her own scars

Because people were reluctant to speak out, I would even show them my scars. Unless I did this, to gain their trust, they wouldn’t give their signatures. I also wondered why people had to say such unpleasant things to me.

Kiyoshi Kikkwa, who passed away in 1986 at the age of 74, was dubbed “Atomic bomb victim No. 1” and he helped spearhead the A-bomb survivors’ movement in the early days. In August 1951, he formed the Rehabilitation Group for A-bomb Survivors, the first survivors’ organization. In August 1952, the Atomic Bomb Survivors Association was established, which led to the founding of the Japan Confederation of A- and H-bomb Sufferers Organizations in 1956.

I believe that the Atomic Bomb Medical Relief Law, which everyone had hoped would be realized, was enacted in 1957 as a result of the many survivors who raised their voices. I came to keenly understand Mr. Kikkawa’s words: “An A-bomb survivor can’t do anything alone. Nothing can be gained unless we stand together and work together.”

Also, in 1956, Mr. Kikkawa persuaded Ms. Yoneda to share her experience of the atomic bombing at a gathering held in the city of Nagaoka in Niigata Prefecture, saying, “We can’t make any progress at all unless people across the nation know about the A-bomb damage.”

The truth is, I felt embarrassed and I didn’t want to talk about my A-bomb experience. I only made three points: war is wrong; nuclear weapons are wrong; and peace is the most important thing. I just cried and cried, and words failed me.

It was also true, though, that while the A-bomb survivors’ organizations came to life and the survivors’ movement gained momentum, there were arguments and difficult, emotional squabbles over the operation of these organizations. Even today, the Hiroshima Prefectural Confederation of A-bomb Sufferers Organizations is still split into two factions, right?

As an organization gets bigger, people in the organization, whatever they may be doing, form factions and become divided. It might be true of any era, but why does an organization seeking peace and nuclear abolition have to fracture?