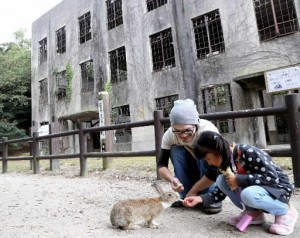 Located off the coast of the city of Takehara in Hiroshima Prefecture, Ohkunoshima Island, which was erased from maps during World War II, has become a popular tourist spot, attracting nearly 190,000 visitors last year. On the island, which was home to a poison gas factory run by the former Imperial Japanese Army, the ruins of a storage building for poison gas canisters and an electric power station can still be seen. However, many visitors only become aware of this grim history for the first time when they set foot on the island. The war ended 70 years ago and a memorial ceremony for the victims of poison gas made here will be held on the island on October 22. This series explores current conditions on the island and how the sufferers have been coping.

Tom Higgins, 20, a college student from the U.S. state of Florida, said, “I didn’t know this island used to produce poison gas. That’s terrible.” As wild rabbits hopped about and nibbled on the food offered by visitors, Mr. Higgins said that the scenic island today made it hard to imagine what it was like during the war.

Mr. Higgins is one of these international visitors. He said, “Last year some friends showed me the video about ‘rabbit island.’ I had never seen so many rabbits and I really wanted to visit.”

The Ohkunoshima Poison Gas Museum, which is managed by the Takehara municipal government, is on the island and displays work clothes and datebooks from the former factory workers and equipment used to manufacture poison gas at that time. The museum opened in 1988 and, at first, had between 50,000 and 60,000 visitors a year. Then, starting in the late 1990s, the number of visitors declined. From 2004 to 2008, there were about 20,000 annual visitors. Since then, the number has gradually increased, with 49,490 people visiting the museum in 2014.

The workers and mobilized students involved in producing the poison gas were unaware of the dangers of their work. More than 2,000 people alive today, nationwide, still suffer ill health from the aftereffects of their exposure to poison gas. And poison gas produced on the island, then subsequently abandoned in China, still causes harm even decades after the war.

Educational site for reflecting on peace

Naoto Shinmoto, 64, who researches the local history of the Tadanoumi district in Takehara, across from the island, said, “The island looks like a paradise now, but the wounds caused by the war haven’t yet fully healed. The island is educational and helps us think about peace.” Mr. Shinmoto hopes that visitors will reflect on this negative legacy and the hardships which continue even today.

In 2009, smoke bombs which were believed to be canisters of sneeze gas were found on the floor of the sea off Ohkunoshima Island. After a careful investigation, the Japanese government concluded that the canisters posed no safety concerns. Masaharu Ishida, 39, a research associate at the Hiroshima University Archives, located in the city of Higashihiroshima, said, “Though 70 years have passed since the end of World War II, it can’t be denied that there are still poisonous substances on the sea bed nearby.”

Ohkunoshima Island
Ohkunoshima Island is located three kilometers off the coast of Tadanoumi in the city of Takehara. It has a circumference of 4.3 kilometers and an area of 0.7 square kilometers. It is about 10 minutes by ferry from Tadanoumi Port. The former Imperial Japanese Army manufactured about 6,600 tons of poison gas weapons, including yperite (mustard gas) and sneeze gas shells as well as parts of balloon bombs from 1929 to 1944. The island was deemed a military secret during the war and removed from maps. Today, the Poison Gas Museum and National Park Resort Village Ohkunoshima are on the island. Every autumn, family members of poison gas victims visit the island and hold a memorial ceremony.