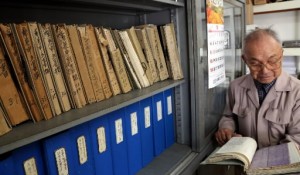 “We offer a silent prayer for the poison gas victims who have passed away,” said a member of the liaison council for Ohkunoshima poison gas sufferers at its annual general meeting held at the Takehara city office. In all, 17 members of the council, composed of representatives from nine affiliated groups, attended the meeting. The aging faces of those praying for the repose of the poison gas victims were lined with deep wrinkles.

The nine affiliated groups of the liaison council consist of associations of former mobilized students and organizations or friendship societies of former workers at the poison gas plant. The liaison council has been working to expand the health care support and other benefits provided by the Japanese government to those who were once engaged in the production of poison gas. In addition, the council oversees cleaning the memorial monument on Ohkunoshima Island every two months and hosting the memorial service for victims every autumn. Each affiliated group must also address its day-to-day activities, like providing counseling and guidance to members seeking to receive benefits.

Difficult to continue their work

However, these groups are all facing the difficulty of sustaining their activities because the age of their members continues to rise. According to Hiroshima Prefecture, at its peak, in 1987, 4,772 people were in possession of the personal health record, which is given to those who were involved in poison gas production. But the number of holders declined to 2,753 in 2010 (with an average age of 84) and to 2,150 in 2014 (with an average age of 87).

Kazuaki Ishihara, 88, a resident of Mihara City and the chairman of the Ohkunoshima Poison Gas Sufferers Association in the Saizaki area, one of the affiliated groups, was struck by what he saw at the association’s general meeting in May. Though the association has about 60 members, only 15 took part in the meeting: 10 board members and five regular members. Because of their advancing age, other regular members found it difficult to leave their homes to visit the venue for the meeting. “The board members even said that it may be hard to hold the general meeting next year. Up until last year, we had at least 30 participants at the general meeting,” said Mr. Ishihara with a sigh.

In the case of the Friendship Society of Ohkunoshima Poison Gas Sufferers in Mihara, the number of members has fallen from nearly 280 to around 70. Five board members are now simultaneously performing two or more duties to cover the 13 positions on the board.

On the verge of disbanding

Yasuma Fujimoto, 89, a resident of Mihara and the chairman of the friendship society, has been running articles in the group’s newsletter on the types of documents that members must submit to the government to receive benefits and how to complete this paperwork. In principle, the newsletter has been issued once a month since 2009. Mr. Fujimoto is doing his best to lend support to the aging members of the group, but he shared a sense of crisis, saying, “If one more member of the board passes away, including me, the group will have no choice but to disband.”

At the meeting of the liaison council, the suggestion was made to unite the nine affiliated groups and hire an office manager to oversee the needed procedures for its members. But this idea has not yet been discussed in detail. Masaaki Shinmei, 84, a resident of Mihara and the vice chairman of the liaison council, wonders what should be done. “We’ve been able to carry on with our work because of these supporting groups,” Mr. Shinmei said. “We have to come up with a solution as quickly as possible so we can continue our activities.”

Support for poison gas sufferers
Once poison gas sufferers are formally recognized by the Ministry of Health, Labour and Welfare, they receive the personal health record, which provides a complete health check-up each year for free, and the medical passbook, which exempts them from bearing the self-pay portion of their medical expenses. Depending on their symptoms, additional benefits, like the health care benefit (34,030 yen per month), the health benefit (17,070 yen per month), the special benefit (102,070 yen per month), and the medical benefit (34,030 through 36,420 yen) are paid by the government.