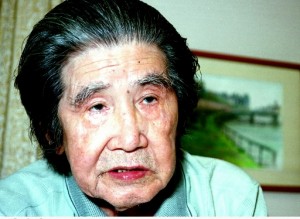 Part 1: Regret at being unable to paint the A-bomb’s true horror

Eyes hit by the bomb’s flash

I’ve suffered from serious cataracts for the past 20 years, and I’m nearly blind at this point. I think it has something to do with my eyes getting hit by the flash of the bomb. Doctors haven’t told me it’s because of the atomic bombing, but it doesn’t seem to be unrelated. When the bomb exploded, I was working at a munitions factory in Hatsukaichi, where I was mobilized for the war effort. There were so many rays of light from the flash, streaking toward the ground.

When I made my way back into Hiroshima, to search for my wife and children, I saw the horrific conditions. I can’t paint any more, though, and I was never able to accurately depict how disastrous it was. This has always been a bitter regret. While I still had some eyesight left, I wanted to produce a big painting. I wanted to say confidently, “This is a painting of the A-bomb.” I even prepared a frame, but it sits on my staircase. What a disappointment.

Before the war, when Mr. Kanezaki was 16, one of his paintings was selected, for the first time, to appear in the Hiroshima prefectural art exhibition. After turning 20, his work won a prize at a major art exhibition. He was striving to become an artist, and was starting to produce good results.

The atomic bombing completely changed my attitude toward life. I had dreamed of making it as an artist, becoming independent, but the bombing made me realize that I shouldn’t be taking it so easy, just painting pictures. There were atomic bombs. I truly thought that the human race would die out.

But I have no regrets about not becoming an artist. No matter what, I had to help eliminate nuclear weapons, which I believed could destroy humanity. So I became dedicated to the A-bomb survivors’ movement. The atomic bomb completely annihilated Hiroshima, sparing nothing. And that’s not all. The bomb produced leukemia and A-bomb diseases. One after another, people died as a result of the bomb’s radiation, even though they appeared to be healthy.

In the years after the atomic bombing, Mr. Kanezaki became engaged in the movements to abolish nuclear arms and support the A-bomb survivors. For some time, he drifted away from painting.

In 1978, I quit my job and began to paint again. Day after day, I visited one Hiroshima temple after another and painted the stone statues of Ksitigarbha. Some of the statues were battered in the bombing; the bomb blast even knocked off some of the heads. I wanted people to realize how powerful the bomb was, to damage stone in this way. The stone statues that survived the bombing attest to the tremendous destructive power of nuclear weapons.

Mr. Kanezaki continued to denounce nuclear weapons through art exhibitions featuring A-bombed stone statues of Ksitigarbha. However, the condition of his cataracts worsened, and he was forced to undergo operations. This surgery, though, could not restore his vision. His dream of producing more paintings was dashed.

Even today, in the 21st century, there are still nuclear weapons. When Hiroshima and Nagasaki were attacked, the United States was the only nation with nuclear arms. Now a lot of countries have these weapons, and there are more than 30,000 nuclear warheads. We have to strengthen our efforts to eliminate them. Above all, Japan, which suffered the atomic bombings, must be more active when it comes to this issue.

There’s no guarantee that nuclear weapons won’t be used again someday. Our future is in jeopardy. The sense of urgency people have for this is too mild. Wise people should offer their wisdom, and the wealthy should contribute money to activate this weakening movement. I’m not going to die until something is done.