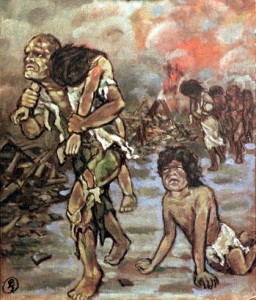 Used as guinea pigs by the U.S.

The United States not only dropped the atomic bomb, it used the survivors as guinea pigs, sucking precious blood right from them. I’m talking about the ABCC [the Atomic Bomb Casualty Commission], which examined the survivors but didn’t provide them with any treatment. And they dissected the A-bomb dead for their research. I can’t help but think that this research was being carried out to make preparations for the next nuclear war.

ABCC, which was established in 1947 by the United States, conducted research on the health effects of radiation emitted by the atomic bomb. In 1975 this institute was reorganized as the Radiation Effects Research Foundation (RERF), run jointly by Japan and the United States.

When my daughter was in fifth grade, they approached us a couple of times to ask if they could examine her. They came in the daytime when I wasn’t home, but my wife refused. Then they waited for my daughter on her way home from school and took her in their car. This is practically kidnapping. That’s how far they went. They didn’t treat us like human beings.

When I visited my neighbors to talk about protesting the ABCC, one elderly woman said, “Look at this,” and she showed me some canned food that she had received from the ABCC. “Who else gives me things like this?” she said. “My neighbors don’t do anything for me.” This was something I hadn’t expected.

And she wasn’t the only one. Another elderly woman, who had poor eyesight, was given glasses. I believe there were a lot more people out there who were given things by the Americans, the ones who dropped the atomic bomb and treated the survivors like guinea pigs. They hurt our pride as Japanese. But how can we blame these old women? This is the consequence of the Japanese government neglecting A-bomb survivors for more than a decade.

The Atomic Bomb Medical Relief Law, which made it possible for A-bomb survivors to undergo medical checkups and receive necessary treatment at the expense of the Japanese government, was enacted in 1957, 12 years after the bombing.

Some survivors experienced “triple distress”: discrimination as an A-bomb survivor; discrimination as a member of the buraku, a community in Japan which suffers discrimination; and poverty. I had to do something so they would feel more positive about being alive, so I started to organize a group of local survivors. With other members of the group, I would visit individual survivors nearly every evening. After the group was formed, I was chosen to be its leader.

The “wall of triple woe”

More than a few of our members were illiterate. We had city officials come and help them apply for the Atomic Bomb Survivor’s Certificate. We also interviewed them and compiled a collection of survivors’ experience titled Kabe (Wall), because I thought the “wall of triple woe” was blocking our progress.

There are foreign nationals who were exposed to the atomic bombing and discriminated against, too. Some of them were forcibly brought to Japan, then faced the bombing. They endured the same experience as the Japanese survivors, so they should be treated the same way. The Japanese government has always been cold toward the survivors. Do the survivors really feel happy to be alive? Or do they feel happy when it’s time to die? I still feel angry.