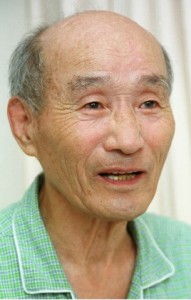 In 1932, when Mr. Sim was six years old, his family moved from present-day Hapcheon County in South Korea to Hiroshima, following his father, who had left for Hiroshima earlier. Mr. Sim experienced the atomic bombing while at a transportation company located in Minami-machi in Minami Ward, about 2.5 kilometers from the hypocenter. He now has liver and kidney ailments. Since May, Mr. Sim has been hospitalized in western Hiroshima Prefecture as he undergoes treatment.

After Japan lost World War II, the rumor spread that all Koreans residing in Japan would be killed. I heard it directly, too. So we departed from Ujina port on a battered, wooden ship in December 1945, leaving behind my older brother’s family, who had suffered injuries in the atomic bombing.

To tell you the truth, my wife and I didn’t want to go back to South Korea. We had no prospects of finding work there. And we couldn’t speak Korean, either. Even though we were heading for our homeland, I even felt terror. It’s funny that I didn’t want to leave Hiroshima, even after I experienced the atomic bombing, isn’t it? One of my Japanese classmates tried to persuade me to stay, saying that we could live together. But I couldn’t let my parents go back to Korea alone.

In Hapcheon, we faced hardship after hardship. We really had little food. Farming was also tough. I couldn’t stand life in the countryside and so I fled to Busan with my wife in 1947. My father said nothing to stop us; he let us go.

I was prepared to die in the war. Other soldiers and I would talk and say that those who died the day before were lucky. I held a grudge against Japan. The Korean War would never have occurred if it hadn’t been for Japan’s occupation.

When I returned to my hometown, it was impossible to find out what had happened to everyone. All the villages were burned to the ground. I guess many A-bomb survivors in Hapcheon died.

In 1983, Mr. Sim visited Hiroshima for the first time in 38 years when he came to Japan for medical treatment, a trip that was organized by the Japanese and South Korean governments. It was then he learned that the Atomic Bomb Medical Relief Law and the A-bomb Survivors Special Measures Law had been put in place for A-bomb survivors in Japan.

It had been my family’s choice to move to Hiroshima; we were trying to escape the poverty back home. So, until the time I returned, I had thought we were just unlucky to have suffered the atomic bombing. Afterward, though, I began to feel angry that I had been discriminated against, and abandoned, even though I was an A-bomb survivor, too.

I still like Hiroshima. It’s my second hometown, the place I spent my younger days, so I have an emotional attachment to the city. But Japan does nothing for us. I have mixed emotions that I can’t really explain.