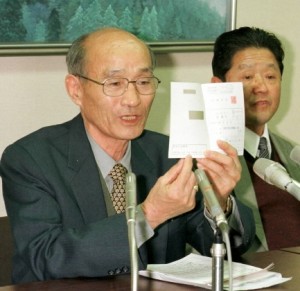 Part 2: Hoping to receive benefits from relief law before death

Request for Hiroshima Prefecture to review his case in 1996

When I go back to South Korea, the Atomic Bomb Survivor’s Certificate is a worthless little booklet. My supporters in Japan told me, “Why don’t you lodge a protest?” So I decided to prod the Japanese government. I would stage a protest not for myself, but for all the A-bomb survivors living in South Korea.

In May 1996, after Mr. Sim returned to South Korea from a trip to Japan for medical treatment, he made the request, in line with the Administrative Appeal Act, that Hiroshima Prefecture review the practice that the health care allowance, a benefit of the Atomic Bomb Survivors Relief Law, was available only when the holder of the Atomic Bomb Survivor’s Certificate was on Japanese soil. Mr. Sim argued that this practice was unfair. Following the prefecture’s rejection of this claim, Mr. Sim filed a request in August of that same year, asking that the Ministry of Health and Welfare reexamine the case. Again, his request was turned down.

I know a single protest doesn’t change anything so I had no expectations. I stated my case in court to the Ministry of Health and Welfare, but it looked like they were there because they had to be, just to keep up appearances. They didn’t take me seriously.

I have the strong feeling that the Japanese government is just waiting for the A-bomb survivors in Korea to die out. I don’t think the Atomic Bomb Survivors Relief Law will be applied to us in our lifetime.

In a similar case, the Osaka District Court issued a ruling this past June which grants permission for the Atomic Bomb Survivors Relief Law to be extended to A-bomb survivors overseas. The Japanese government has appealed the ruling, expressing its intention to review the law.

I truly welcome the ruling. I heard the City of Hiroshima is also considering inviting A-bomb survivors overseas to Japan for medical treatment. I’m glad about all this. But it’s too late, because those who are in real need of treatment can’t come to Japan now.

I registered with the South Korean Atomic Bomb Sufferers Association in 1975 at the invitation of one of my relatives. At the time, I was driving a dump truck. I had only one or two days off each month and was just managing to get by. So I kept my distance from the group back then. I didn’t think it would help at all, anyway.

A-bomb survivors in South Korea don’t usually speak about their experiences, because many people in South Korea welcomed the bombings, believing the attacks hastened the liberation of our country from Japanese occupation. On the rare occasions that we talk about our A-bomb experiences, people regard them with curiosity, rather than finding them horrific.

In 1989, Mr. Sim began serving in the Busan branch of the association, supporting the group’s general affairs for the next six years. Through his communication with members, he came to know the dire situation of A-bomb survivors in South Korea.

Many A-bomb survivors joined the group after their children all got married. In Hiroshima, too, many people hide their A-bomb experiences, don’t they? But some people don’t know about the aftereffects of the atomic bombing. I didn’t know about this, either, until my first visit to Japan for treatment in 1983.

Without support from their children, aging Korean A-bomb survivors can’t survive. Those who weren’t able to educate their children, because of their fragile health, have greater difficulties than those who could. People who aren’t married, who don’t have a wife or children, barely eke out their existence on welfare. It’s something you can’t imagine, right?

My anger has already become chronic. I just hope to receive the benefits of the Atomic Bomb Survivors Relief Law, without discrimination, before I die—even just once. That’s all.