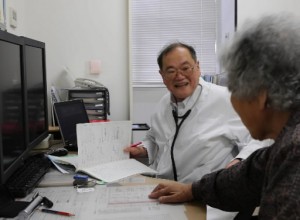 “Let me listen to your chest,” says Dr. Keiichi Kondo, 57, a pulmonologist, to a female patient in her 80s. They were in an examination room in the Tadanoumi Branch Hospital of Kure Kyosai Hospital in the city of Takehara.

The woman first came to this branch hospital 28 years ago, complaining of a sore throat caused by a cold. Ever since, she has been making regular visits because of a persistent cough and sputum. From 1944 to August 1945 she worked on Ohkunoshima Island as a mobilized student, helping to transport raw materials to manufacture poison gas.

Many of the people who were involved in the production of poison gas have become chronically ill. They require regular health check-ups and their condition must be monitored. “However, an increasing number of these patients are now unable to leave their homes, because of their age, which makes it harder, year after year, to see them at the hospital,” Mr. Kondo said.

As a result, a mobile health clinic, which brings a doctor to the patients, serves an important need. A bus travels to communities in the cities of Takehara and Mihara, where the patients live, and they come to the vehicle to see the doctor. In reality, though, the number of patients visiting the mobile health clinic, and the frequency of examinations, have been dropping sharply. And while patient deaths are one reason for the decrease in their number, another factor is that a rising number of patients are no longer able to walk and therefore can’t come to the bus parked in their community. Budget constraints, and a smaller number of doctors participating in the program, are also hampering this effort.

In Hiroshima Prefecture in fiscal year 2005, the number of patients who visited the mobile health clinic came to 3,029 at 44 locations. But the numbers dropped to 1,081 at 25 locations in fiscal 2012 and only 267 patients at five locations by the end of September 2015.

“It’s now time to consider devising a new system, such as providing treatment through house calls and strengthening our cooperation with the patients’ own doctors,” said Nobuoki Kono, 62, the head of an association in the city of Higashihiroshima composed of Hiroshima University researchers who are studying the effects of the poison gas from Ohkunoshima. They are now seeking new strategies to address this problem.

The use of data from medical examinations is another matter. Seventy-three years have passed since the hospital opened and the clinical records of poison gas patients, including patient interviews, lung function tests, and chest X-rays, now total approximately 3,100. These records include both the patients’ initial symptoms and subsequent symptoms and can help to determine effective treatments for people in other countries who suffer from the effects of poison gas released by chemical weapons.

About 10 years ago the hospital began the process of analyzing this data and is compiling the information into digital PDF documents. The analysis will be completed in the near future, though it remains to be seen how this important data will be used.

Aftereffects of poison gas
Poison gas, such as mustard gas and lewisite, causes intense inflammation when it contacts the skin. People who were involved in the making of poison gas on Ohkunoshima Island have a high incidence of pneumonia, chronic bronchitis, and respiratory cancer as a result of inhaling airborne poison gas fumes. Other symptoms reported by patients include unexplained headaches and severe coughs and sputum which make breathing difficult.