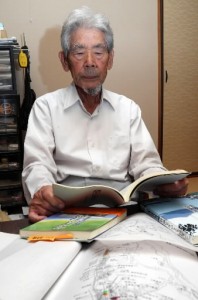 The average age of former workers and mobilized students who were involved in producing poison gas on Ohkunoshima Island during World War II has reached 87. While many feel reluctant to talk about their experiences, some have drawn this once sealed-off time out from the depths of their memories and others have made up their minds to continue sharing their accounts. They say they are driven by a sense of crisis over the fact that a rising number of people give no thought to this history now that 70 years have passed since the war ended.

Daiji Ito, 91, now lives in Suita, Osaka Prefecture. After finishing high school in Ube, Yamaguchi Prefecture, he worked at the Japanese Army Poison Gas Factory on Ohkunoshima Island from the age of 18 to 21. His work there involved experiments with poison gas and its practical applications.

“Who’s to blame for making poison gas?” a student asked him, looking him in the eye, after he shared his experience at an elementary school near his home in 2010. He was taken aback by this direct question and could only force out the words, “I’m sorry for what I did.”

After the war, Mr. Ito worked in manufacturing, devoting himself fully to his career. Feeling guilt over his involvement in making “inhumane weapons,” he never mentioned his experience on Ohkunoshima Island to others and broke off contact with his former coworkers at the poison gas plant. Though he could have justified his actions from the perspective that winning the war was the highest priority back then, he also saw that his involvement in producing poison gas was an indelible fact.

“That boy’s question made me face this fact,” Mr. Ito said. These days he is not in the best of health and takes seven different medications that he cannot do without. But even though he struggles with coughing fits and phlegm in his throat, he never declines when asked to speak. He said, “As someone who worked at the poison gas factory, I think it’s my duty to continue sharing my experience.” About a year ago, he donated some materials connected to the factory to the City of Takehara, where the island is located.

He has already drafted his will. He does not want a funeral service, and hopes his ashes will be scattered in the sea around Ohkunoshima Island, where he labored to bring the war to a victorious end. He is determined to rest for eternity near the island where he spent the prime of his life.

Believing in the power of pictures

Reiko Okada, 86, who lives in Mihara, Hiroshima Prefecture, is a former art teacher. Tracing her memories, she turned pages of books she published at her own expense which show her art work. Ms. Okada began working at the factory as a mobilized student in November 1944 and was involved in the making of balloon bombs.

She has published four collections of pictures, which depict such scenes as people carrying raw materials for producing poison gas out of a storage facility. The first collection was published in 1989, and the fourth in 2010. She decided to create books of her art work after children did not respond as strongly as she had hoped when she shared her experience at schools.

“I have to convey my experience to others. But what should I tell them and what’s the best way of doing this?” After pondering this question, she decided to express her experience through pictures. “Words are important in sharing our experiences,” she said, “but just one picture can be very inspiring and I want to believe these pictures have that power.”

Handing down experiences making poison gas
The late Hatsuichi Murakami was the first director of the poison gas museum that opened on the Ohkunoshima Island in 1988. Mr. Murakami shared his experience with students who visited the island on school trips as part of their peace studies. After Mr. Murakami left this post in the spring of 1996, organized activities to relate the experiences of making poison gas have not been carried out. Currently, members of groups of poison gas sufferers or citizens give talks or serve as guides on the island, by request.