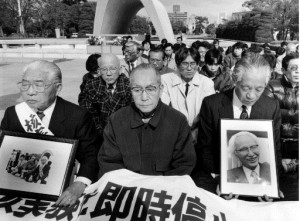 Part 2: Sit-ins must continue until nuclear weapons are abolished

When I was sitting still in protest, I sometimes wondered if this form of protest was good enough. But there was nothing else I could do. When a nuclear test is conducted, it’s important to demonstrate our opposition, even just by staging a sit-in. A-bomb survivors can’t condone nuclear experiments. We must continue conveying this position.

Sit-in protests were demanding for me, mentally, because it was hot in summer and cold in winter. But nuclear tests can’t be stopped by staging sit-ins just once or twice. I told myself, “I have to keep this up.”

A-bomb survivors and others have staged sit-ins in front of the Cenotaph for the A-bomb Victims, to protest nuclear tests, more than 500 times to date.

I joined a sit-in for the first time on July 20, 1973. The protest was against France, which was set to conduct a nuclear test.

The sit-in was carried out about ten years after the split of the Conference Against A- and H-Bombs. The campaign against atomic and hydrogen bombs and the A-bomb survivors’ movement were gaining momentum, faced with common challenges like the health issues of second-generation A-bomb survivors. At the time, the people involved in these two movements were the most conscious of peace issues. After we took joint action to address the health issues of the second-generation survivors, we began to work in concert to oppose nuclear testing.

The first sit-in was attended by 130 people from 17 organizations, including two factions of the Hiroshima Prefectural Confederation of A-bomb Sufferers Organizations. Ichiro Moritaki (1901-1994), professor emeritus of Hiroshima University, who would later become the symbol of these protests, was present at the first sit-in.

Mr. Moritaki described the growth of the sit-in protests as the “chain reaction of human spirits.” In line with his words, I thought of using “chain reaction” to form a much larger circle of protests against nuclear testing. From the end of 1975, I began joining sit-ins in front of Hiroshima station, too. The circle of opposition was growing in and out of Hiroshima Prefecture.

As I sat in protest, I did a lot of thinking. For instance, I thought about the days I worked at Hiroshima station, including the day of the atomic bombing, and the death of my co-worker. Each time I thought of these things, it hit me once more that atomic bombs must never be dropped on human beings again and war must never be waged.

On September 25, 1996, the 500th sit-in was held, following the U.N. General Assembly’s adoption of the Comprehensive Test Ban Treaty (CTBT), which bans all nuclear tests that result in an explosion. For the first time, the sit-in participants sat facing the Cenotaph for the A-bomb Victims as they sought to convey this achievement to the A-bomb victims.

Snub of CTBT is unacceptable

The United States is saying that it will not ratify the CTBT, a treaty which bans nuclear weapons, even though it has finally been created after the continuous efforts we made with the sit-ins, which helped rouse international public opinion against nuclear weapons. If we accept this sort of attitude from the United States, the nuclear weapon states will be increasingly indifferent when it comes to taking action to abolish nuclear arms.

As an A-bomb survivor, and a part of the sit-ins for many years, I’m mortified by the U.S. attitude. Now that I’ve stepped back from the movement because my health has suffered, I’m feeling so frustrated.