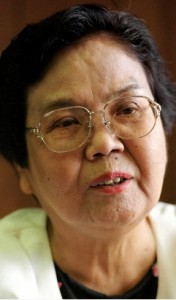 When I was younger, I would shy away from the problems I faced because of the atomic bombing. When summer came, I always thought, “If I hadn’t been burned, I wouldn’t have these keloid scars on my arms and legs.” I felt miserable, and I didn’t think I’d be able to live and work with confidence as an adult. I was timid and I was worried about my appearance.

Ms. Nakatani was 13, a second-year student at Shintoku Girls’ High School, when she experienced the atomic bombing. She was at school, located in the Minamitakeya district in downtown Hiroshima, 1.4 kilometers from the hypocenter, and the students were getting ready to depart to help dismantle buildings to create a fire lane, as part of the war effort.

Before the atomic bombing, I enjoyed school. When air raid warnings sounded, we would hide under our desks and speak in whispers. I took out some roasted soy beans from my emergency pack and exchanged food with my friends. We found fun in these small things. But thinking back on the hardships people were experiencing because of the war, I suppose this was indiscreet.

The day I asked friends over to eat

It was the day of the local summer festival in the Eba area. My mother said, “I’ll make barazushi [sushi rice mixed or topped with various ingredients], and you can bring your friends.” I was excited and I was telling my friends about it on the school yard, near the platform for school assemblies. It happened the moment I told them, “After work today, come over to my house.”

After the A-bomb exploded, Ms. Nakatani fled to the former Army Clothing Depot in Minami Ward, and was rescued by her father and brother the next day, in the evening.

My father said he was so glad I had waited there, and he started sobbing. He wrapped my blistered body with a blanket my mother had given him. It was a blanket that came from my mother when she married my father.

I was bedridden, suffering from my burns, until the end of 1945. My parents watched me around the clock. They disinfected my wounds three times a day. They wiped off the pus, applied homemade medicine, and massaged my arms, which I couldn’t move. However tired she might have been, my mother never went to sleep while I was awake.

On my 14th birthday, I was finally sitting up in bed, and I asked my mother for a mirror so I could look at myself. But she told me that all the mirrors in the house were broken because of the bombing--which wasn’t true at all. I learned this after I was on my feet again. My mother had been kindly considering my feelings as she didn’t want me to see that I was bald and had scars from the burns.

I’m a cheerful person, but in summer, when I saw people wearing sleeveless dresses or I had to be absent from school, I would vent my anger on my parents. I told them, “If you really loved me, you wouldn’t have brought me back home that day. You kept me alive, like I was your toy, just to feed your own egos. If you had left me alone to die, I wouldn’t be in such agony now.”

My father had searched for me after the bombing without a wink of sleep. My mother then nursed me and fanned me with a paper fan all through the night. But I lashed out at them many times with these harsh words. Though my mother was patient with me, she cried quietly while heating water for the bathtub. I realize I can’t thank or admire my parents enough.

I have nephritis [a kidney condition] and have been receiving dialysis three times a week for the last seven years. I’m now close to my parents’ age when they passed away. When I offer a prayer each month on the days of their deaths, I still deeply regret that I never told them I was sorry.