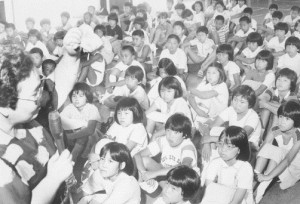 Encouraged by students to tell her story

I thought I could avoid the cold eyes of adults toward the A-bomb survivors if I worked with children. This is one of the real reasons that I decided to become a teacher. However hot it was in summer, I would always wear long-sleeved tops and socks to hide my keloids. After I started teaching, for several years I would take a trip around August 6 to get away from Hiroshima. I didn’t tell anyone about my experience of the atomic bombing.

Children are honest. They wondered why I wore long sleeves in the summer and wouldn’t teach swimming. During one recess some students approached me and asked why. At that point I thought, “I’ve got to do something about this. I’m not living my life fully.” Around 10 years after the bombing, I finally found the courage to wear short sleeves.

At the end of June 1968, when she was 36 and a teacher at Senda Elementary School, Ms. Nakatani was diagnosed with a precancerous condition in her left heel, which had a keloid, and her right elbow.

I waited until summer vacation, then checked into a hospital. Until the day before summer vacation began, I had been doing a lot of thinking about how I should tell my students that I would undergo surgery for cancer and that I had to take some time off after the summer vacation. I didn’t want to shock them. They were fifth graders, and some of them didn’t know that I was an A-bomb survivor.

They asked for my address, so they could send me greeting cards during the summer. I knew that I wouldn’t be able to write back to them, so I said, “You should send cards to your relatives and other people who have been lending you warm support, not me.” But they wouldn’t listen and I knew I couldn’t convince them.

I wasn’t sure if I’d be able to come back to school. Why did I have to get cancer 23 years after the bombing! I found myself starting to get angry. I made up my mind to cast everything aside and speak frankly about the things I had been keeping to myself. This is how I started sharing my A-bomb account.

Ms. Nakatani was operated on three times at the hospital of the late Dr. Tomin Harada, who devoted himself to providing medical care to A-bomb survivors. She was discharged from the hospital in September 1968.

I never want children to suffer the same experience

I thought of quitting teaching, because being a teacher is physically demanding. But my students sent me letters while I was in the hospital, and thanks to them, I could endure that difficult time.

Because I’m a survivor, I gave up the idea of getting married, so I don’t have children of my own. But I treasured my students, though I used to distrust people. I wasn’t confident that I could continue teaching, and yet I wanted to be their teacher again before they finished fifth grade. I had mixed feelings about it.

In 1970, Ms. Nakatani was transferred to Eba Elementary School and began to relate her A-bomb account more actively.

When I told my story, the media sensationalized it and I had a lot of unpleasant experiences. Some reporters trampled over my feelings, taking only the parts they wanted and discarding the rest. I understand their position, but some of these interviews were terrible.

If I hadn’t become a teacher, I would have kept my experience of the bombing to myself. With the support of my students, I felt the courage to grow out of my old self. I changed my outlook and now I believe that sharing my story honestly will benefit both my students and myself. I never want children today to suffer what I experienced. I’ve been driven by this sense of responsibility and duty.