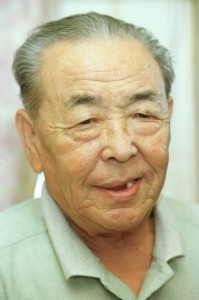 As I have been handicapped since childhood, I don’t know a time when I wasn’t physically disabled. But for other A-bomb survivors, the injuries they suffered on August 6 suddenly left them with disabilities. They probably dwell on the idea: if only the atomic bomb hadn’t been dropped. It was harder for them, I thought. And I wanted to be of some help to them.

As a result of polio, Mr. Takeuchi’s left leg is five centimeters shorter than his right leg. He has had difficulty walking since he was a small child. At 17, he experienced the atomic bombing while at a post office in the Koi district, where he was mobilized for the war effort.

After the war, I worked for the post office until 1953. Then I learned how to repair radios at a vocational school for the disabled. In the spring of 1955, I was invited to join a group of A-bomb survivors by an acquaintance. It was decided that the first gathering of the World Conference Against Atomic and Hydrogen Bombs would be held in Hiroshima, and I was involved in preparations for the conference.

It was at that time that I met Heiichi Fujii, who had appealed for the conference to be held in Hiroshima. (Mr. Fujii died in 1996 at the age of 80). He was called “Heii-zhan,” and he was really passionate about the peace movement. He rushed about so much for these activities that his family business, a lumber shop, began to go downhill.

When the conference organizers decided to have women with keloid scars on their faces offer their testimonies for one session, these women were unwilling to share their experiences. Mr. Fujii tried desperately to persuade them to speak out, telling them, “If you don’t talk, no one will know how cruel the atomic bomb was.” I was there, listening to him, and I thought he was very convincing. Ultimately, the women did share their accounts at the conference, and we were able to convey the horror of the atomic bomb.

In March of 1956, the year following the conference, Mr. Takeuchi gathered about 40 A-bomb survivors from Hiroshima Prefecture, and traveled to Tokyo to petition the Diet to implement relief measures for A-bomb survivors. They spoke out about the miserable conditions of the survivors to then Prime Minister Ichiro Hatoyama and Finance Minister Hayato Ikeda.

On our way back from Tokyo, one housewife wrote a poem. “Please put a warm hand, like sunlight at ten in the morning, / on survivors whose forgotten smiles lie somewhere in the distance / due to their grief and sorrow, / so they can continue to believe that it’s good to be alive.” In this poem were imbued the feelings of the A-bomb survivors. We passed the poem around and read it in turn. We then pledged to form local organizations for A-bomb survivors in our region.

When I first became involved in the peace movement, many people were just trying hard to survive. Even in Hiroshima, the movement had little momentum for seeking relief measures for the A-bomb survivors. Someone once told me, “The government is having a hard time after the war. I guess it can’t provide relief measures for survivors.” All the more because of this background, I was thrilled when the law was finally enacted.

But some people cast a cold eye on A-bomb survivors. A-bomb survivors don’t have to pay for medical care when they show their Atomic Bomb Survivor’s Certificate. Partly because of this benefit, some say, “It’s good to be an A-bomb survivor,” despite the fact that survivors worry about coming down with A-bomb diseases and suffer from people’s prejudice. I want to tell them, “If it were possible, I would swap this part of my life for yours any time.”