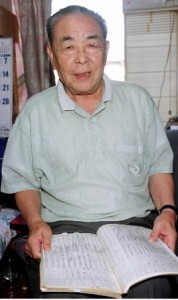 Part 2: Atomic Bomb Survivor’s Certificate for as many survivors as possible

The Atomic Bomb Medical Relief Law was created after considerable effort. If people don’t take advantage of it, it will lose its meaning. The law was realized only after A-bomb survivors, despite their embarrassment, gathered signatures, exposed their keloid scars to the public, and appealed for the law on the streets. So I’ve wanted to help survivors in need of the Atomic Bomb Survivor’s Certificate get it as soon as possible.

In principle, an A-bomb survivor needs two or more people who can serve as witnesses for the applicant’s A-bomb experience in order to obtain the Atomic Bomb Survivor’s Certificate. But as the years have passed since the atomic bombing, some survivors are unable to get the certificate because they cannot locate witnesses. In 1972, the Hiroshima Prefectural Confederation of A-bomb Sufferers Organizations decided to take on the task of searching for witnesses for A-bomb survivors, and Mr. Takeuchi, a staff member at the secretariat, agreed to serve as an advisor to those in this predicament.

People who returned to their hometowns in outlying areas after the atomic bombing or who came to Hiroshima from other prefectures to help with the relief efforts have had a hard time finding witnesses. In the beginning, there was little A-bomb-related material to refer to. So if the applicant for the certificate had been a soldier of a rescue unit, I gathered information from lists of names at veterans’ associations, or if the applicant was a student at the time of the bombing, I gathered information from lists of students or graduates. I also regularly studied Record of the A-bomb Disaster, issued by the City of Hiroshima, which was the only public resource on the bombing back then.

Before long, I began to understand which prefectures the rescue units had come from, which schools were mobilized where, and who could serve as witnesses. When asked about potential witnesses, I was then able to say, “This particular person was at this particular place.”

Mr. Takeuchi examined A-bomb-related material, listened to the persons concerned, and made a painstaking search for witnesses. Over the course of 22 years—until 1993, when he left this role after his wife Miyoko, 69, became paralyzed on one side—he helped locate witnesses for as many as 5,000 people. Among them, information on 815 survivors appeared in the newspaper or on television, and nearly all of them were able to obtain the Atomic Bomb Survivor’s Certificate.

Not all of the A-bomb survivors have applied for the certificate, though. For instance, a mother who experienced the atomic bombing with her baby hid this fact and didn’t apply because she was worried that her A-bomb experience might affect her child’s marriage prospects in the future. A-bomb survivors have suffered from prejudice and discrimination.

It’s wrong for survivors to hide their experience

I’ve said before, though, that this is wrong. Exposure to radiation is a serious thing. The radiation may affect not only the person who was directly exposed, but also any children. The long-term effects aren’t clear yet. That’s why the atomic bombing is so horrible, isn’t it?

If a mother died without telling her children that she experienced the atomic bombing, what will become of them? The facts of her exposure to the atomic bomb will be buried with her. Even if the effects of radiation on second-generation survivors are confirmed, and some measures are taken, the children won’t be able to benefit from these relief measures.

I hope that A-bomb survivors will take steps to get the Atomic Bomb Survivor’s Certificate, the proof of their A-bomb experience. They needn’t use it if they don’t want to, but it’s important to hold.

Even now, about 600 people apply to the City of Hiroshima each year for the Atomic Bomb Survivor’s Certificate. About 20 percent of these applicants are unable to receive the certificate on the grounds that they have not found the necessary witnesses, among other reasons. The advancing age of the A-bomb survivors, and their fading memories, have become obstacles for the applicants.

It’s important that as many people as possible get the certificate and convey the fact that so many people fell victim to the atomic bombing to future generations. Though I retired from my position as an advisor to A-bomb survivors, I’m still helping five people search for witnesses. I view this as a responsibility of an A-bomb survivor of Hiroshima, and I think it’s the least I can do.