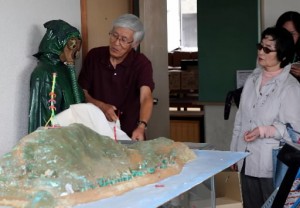 Part 5: Efforts to hand down the island’s history are weakening
by Satoshi Yamashita

When the door to the old classroom was opened, they found things covered with dust. The classroom is in the building of the former Tadanoumi Higashi Elementary School in the city of Takehara, Hiroshima Prefecture. Six residents of the Tadanoumi-higashi district had come to see how the materials involving the wartime poison gas plant on Ohkunoshima Island had been preserved. They let out a sigh.

Originally, these materials had been located at Tadanoumi Junior High School in the city of Takehara. Over the course of several years, starting in 1992, students of the school studied the history of the island and its poison gas production, collected information, and assembled the materials. There are more than 100 items, including a figure of a factory worker in protective gear, a diorama of the island, and poison gas containers. The school provided a room, calling it the “Reference Room Ohkunoshima,” and it was open to those outside the school as well.

It has now been a year and a half since the materials were moved, but their fate has not yet been determined. The city board of education has cited the small number of visitors to the room as one reason, but others argue a different position. Shigeki Wakimoto, 66, a city council member and one of the six people who came to inspect the materials, said, “The storage room is locked and isn’t open to the public on a regular basis. Under these conditions, it isn’t fair to say that the room has few visitors.” Mr. Wakimoto added, “I suspect the interest of teachers and children in studying the scars that were left on this community by the war is also declining.” If more interest is shown, the city government would have no choice but to respond more proactively.

Some suggest that the problem involving these materials is the same sort of problem plaguing peace education as a whole. One person in the group of visitors said, “No one in the educational community has stepped up to say that Ohkunoshima Island should be made use of for the purpose of peace education.”

According to the board of education, elementary school and junior high school students from the Tadanoumi district are ferried to the island on a joint school trip once every three years and visit the Poison Gas Museum operated by the city government. When the late Hatsuichi Murakami, the first director of the museum, was alive, he would speak at the schools. Currently, however, the students simply learn from reading materials that the island was a center of poison gas production during the war.

Masaaki Hisashige, 54, the vice superintendent of the board of education, acknowledged the importance of peace education and said, “We’re trying to determine what we can do under the current circumstances when the number of poison gas sufferers is dwindling.” Mr. Hisashige explained that they will review the use of the materials when they consider how the former sites of Tadanoumi Higashi Elementary School and Tadanoumi Nishi Elementary School will be used.

Masayuki Yamauchi, 70, the head of a citizens’ study group on the history of poison gas production on the island, stressed, “Ohkunoshima is a living part of the past. It’s important to continuously provide places to hand down this story to children.”

Peace education at the Poison Gas Museum on Ohkunoshima Island
According to the City of Takehara and other sources, 65 elementary schools, junior high schools, and high schools in Hiroshima Prefecture visited the museum in fiscal 2001. The number subsequently fell, in the fiscal years from 2004 and 2010, to between nine and 18 schools. Since fiscal 2011, the total has dropped further to only four or five. In fiscal 2014, six schools from Hiroshima Prefecture paid visits to the museum, but none of these schools was from the city of Takehara.