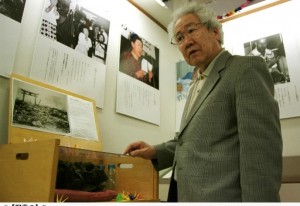 Living in the countryside is hard for A-bomb survivors

“There’s no such thing as an A-bomb survivor in Hokkaido,” the staff at the village office told me. Living in the countryside, far from Hiroshima, including in Hokkaido, is harder for A-bomb survivors than people in Hiroshima imagine. There was, of course, prejudice and discrimination against A-bomb survivors in these places. And it was difficult to get information. Until 1984, when I obtained the Atomic Bomb Survivor’s Certificate, I knew little about the relief measures, because I was assigned to a junior high school in the countryside.

In 1954, Mr. Yasui became a junior high school teacher, and he began to share his A-bomb experience with his students.

Sharing the A-bomb experience is a duty

When the children urged me to talk about Hiroshima, I would tell them about my experience of the bombing, little by little, during school hours. I would draw a map of Hiroshima on the blackboard and the children listened to me very intently. The Parent-Teacher Association, after hearing that I had talked to the children about my experience, once asked me to share my A-bomb account with them, too. I also solicited donations and sent young people from the town to the World Conference Against Atomic and Hydrogen Bombs.

Many male A-bomb survivors in Hokkaido came here as soldiers, while many female survivors came as members of pioneer groups to work the land. Having talked with former soldiers here who experienced the atomic bombing, I felt fewer of them than I expected actually saw the horrible conditions there. So it’s hard for them to talk about their experience of the bombing, even if they try. Some A-bomb survivors fled to Hokkaido to hide their A-bomb experience.

Mr. Yasui is now the director of the A-bomb survivors’ association in Hokkaido, which has a membership of 220 people. Despite poor health, he continues to offer his A-bomb account.

Some people may say that we are doing this because we want to. But it’s not for fun. Peace issues are really important from an international point of view, too. I realized this by participating in a conference of an NGO that lent support to the third U.N. Special Session on Disarmament, held in New York in 1988, and by visiting Sweden in 1987 and interacting with students there.

Because of our patient efforts, our No More Hibakusha Hall has been included even on the itineraries of school trips taken by elementary and junior high schools in Hokkaido. Over 10,000 people have visited the facility.

The Hokkaido No More Hibakusha Hall, located in Sapporo, was completed in 1991. More than 150 A-bomb-related materials are on display there.

Though we’ve been keeping the hall going, we’re now reaching our limits. Before all the A-bomb survivors are gone, we have to find someone who will take over the responsibility of running it. I think we have to decide what we’re going to do as early as this fiscal year.

A-bomb survivors are growing old and we can’t see very far into the future. I imagine the survivors will be active for another five years, at most. So we have to focus on certain goals as we carry out our efforts.

Until the day we die, we have to appeal for “No More Hibakusha” with more pride and determination--determination so strong as to write these words into our wills.