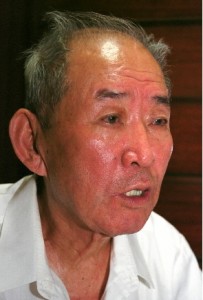 Obtained Atomic Bomb Survivor’s Certificate and went on in Japan

I have no good memories of Hiroshima. It’s impossible for me to have fond memories of the place. I even hate to see it in dreams. So I’ve never felt like visiting since I left Hiroshima after the atomic bombing.

Mr. Kim came to Osaka from South Korea in 1933. In 1943, his family evacuated from Osaka, moving to Hiroshima. He experienced the atomic bombing in Senda-machi, part of Naka Ward, about 1.5 kilometers from the hypocenter. He was 27 years old at the time.

I was helping my landlord demolish his house to create a fire lane. When I was asking him where I should put the wooden debris, the left side of my body got hot. At the time, I was wearing only an undershirt on my upper body. Look, you can see the scars from the burns I suffered along the neck of the undershirt.

Separated from his family

My mother came searching for me from her evacuation site in Ono town, Hiroshima, and was exposed to residual radiation from the blast. My parents and my wife were among those who returned to South Korea in October, but I stayed behind and paid visits to a hospital in Ono for more than a year. My burns didn’t heal easily and throughout that time I had a fever and felt fatigued.

I wanted to go back to South Korea and I intended to return there after I recovered. But when I got a bit better, I didn’t feel like going back. In South Korea, I can’t get the Atomic Bomb Survivor’s Certificate, you know. In Japan, I can easily go to the hospital.

My wife had her name removed from our family register after she returned to South Korea. My mother died in 1974. But it wasn’t until nine years later that I learned about this.

In 1947, Mr. Kim returned to Osaka, where he had lived before moving to Hiroshima, and took up work at a fuel shop. After quitting this job, he moved from place to place in the Kanto region, including Tokyo and Chiba, seeking work.

In and out of the hospital

Because of poor health, I would work for a day, then take the next day off. This meant I would get fired in no time. I worked as a day laborer at various construction sites, like a playing field and tennis courts in Tokyo.

Around 1955, I stopped working and began to receive welfare. I was in and out of the hospital, going from one hospital to another. I had surgery for liver cancer six years ago. My back now aches too much for me to walk, so I don’t go anywhere all day. I leave my bedding out all the time now.

Mr. Kim had planned to visit Hiroshima this summer for the first time in 54 years to attend the Hiroshima Peace Memorial Ceremony on August 6 as a representative of the bereaved families of the A-bomb victims in Tokyo. But with his health deteriorating, and the fact that he abhors Hiroshima, he wavered in this decision until just prior to the ceremony. On August 3, Mr. Kim informed the City of Hiroshima that he would be absent.

In March, the Tokyo Federation of A-bomb Sufferers Organizations invited me to visit Hiroshima. When I lived there, my neighbors had been kind to me, but they were all killed in the atomic bombing. If I went, I would have to remember all these things. I hesitated, but I made up my mind to visit Hiroshima at least this one time, thinking this would be my last chance.

But I haven’t felt well since the early spring. This year we’re having a hot summer, too, and I was worried about standing during the ceremony. So, on second thought, I decided not to go. I don’t want to think about the atomic bombing after all these years. What good would it do to go back to Hiroshima 56 years after the bombing? No matter how hard I might appeal to the public, my body would never be restored to its original state.

I stayed in Japan, so I obtained the Atomic Bomb Survivor’s Certificate and I went on. That’s the way it is.