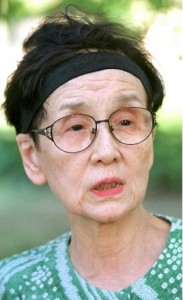 Feeling guilty for having survived

There were about 50 students in my class, but only a few of us survived the atomic bombing. I feel so guilty about my classmates who died in agony that day. I don’t have the courage to face them.

At the time of the atomic bombing, Ms. Tando was a first-year student at Hiroshima Municipal First Girls High School (now, Hiroshima Municipal Funairi High School). The first-year students had been mobilized for the war effort and were helping to dismantle buildings to create a fire lane. Working outside, near the hypocenter, all of them perished in the blast. Ms. Tando, though, was absent from school that day to do chores around the house. She suffered severe burns at her home, located in the Funairi-honmachi district, but managed to cheat death.

Friend who delivered her note of absence died, too

That morning I had handed a note reporting my absence to a friend of mine, but that friend died, too, at the work site. Because my father, my younger brother, and my younger sister were all killed, I fled with my mother and my two-year-old brother, who had moved from our home in the Funaichi-honmachi district, to a relative’s home in the city of Hatsukaichi, west of Hiroshima. My mother tended to me day and night, and my burns healed in about three months. But I still stayed home from school, and we sent in a notice of withdrawal.

This was partly because we were struggling financially after my father died. But, more than that, the fact that I alone had survived lay like a heavy weight on my mind. I couldn’t bring myself to ask my mother to let me return to school, even though I wanted to study there again. Before the bombing, I had passed the entrance exam, entered the school, and even become class president.

Ms. Tando enrolled at a school in Hatsukaichi City instead. After graduating from here, she became a nurse, and then an employee of the Japan National Railway. Her work supported her mother and younger brother. Though she kept silent about her A-bomb experience, around 20 years after the bombing, she met Misao Nagoya, who died in 1986, through the union movement. This encounter led her to share her A-bomb account with others.

Ms. Nagoya lost her second son, a second-generation A-bomb survivor, to leukemia. Even though she was in poor health, too, she did her best to communicate her A-bomb experience, telling others that there must be no more victims of such bombs. Her example made me feel that I had to start talking about my own A-bomb experience.

Conveying the truth is my work

A monument inscribed with the names of the victims from Hiroshima Municipal First Girls High School stands near Peace Boulevard, where my classmates died during the demolition work. I began to bring children to the memorial and talk about my A-bomb experience. It’s harder for me to talk about my classmates than to talk about my own family, and tears well up in my eyes.

I feel sorry that I survived when so many died, and this feeling hasn’t faded over the years. I still can’t bring myself to visit the site where the school used to stand, or join the annual memorial service for the students who died. My work, as I see it, is to just remember the dead and convey the truth of that time.

The Chugoku Shimbun examined the A-bomb deaths of the first-year students of Hiroshima Municipal First Girls High School and issued a special article featuring photos of 213 of these students last June. A headshot of the student to whom Ms. Tando handed her note of absence was among them. She now carries this article in her bag, on days when she relates her A-bomb experience to groups of children, and shows it to them.

When I saw the article, it hit me so hard. I couldn’t stop crying over the fact that this many students had died. With these photos of the victims, people can feel the reality of this tragedy. I also want children to understand that so many of my schoolmates died that day.