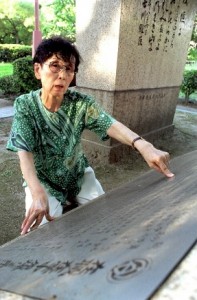 Wanting a place to talk about worries with other survivors

A-bomb survivors have faced all sorts of worries as a result of experiencing the atomic bombing and then living for another fifty years. We’re worried, in particular, that we might fall ill, while some survivors have few relatives because family members died in the atomic bombing. Some were unable to find a job, marry, or have children because of prejudice and discrimination. We also feel a sense of guilt over surviving, when so many perished.

I couldn’t talk about my A-bomb experience, either, for 20 years at least, as if the bombing had seared even my soul. I also had a painful experience that I still can’t talk about today. I got married just before turning 50. Over the years, I’ve been a jumble of emotions that can’t be summed up easily. That’s why I wanted some kind of group where A-bomb survivors could talk about the worries that they’re unable to tell family members and friends, a place where local A-bomb survivors could lend support to each other.

In 1997, Ms. Tando called on A-bomb survivors in the Hakushima district and the Motomachi district in downtown Hiroshima, her hometown, and established a group for A-bomb survivors residing in these two districts. About 30 survivors gathered at a community hall in the area for the group’s first meeting.

I did my best to create a relaxed and comfortable atmosphere by having a meal and singing old songs together with the others. An elderly woman in her 80s swayed happily to the music and sang along. I made it a rule to hand out leaflets of the Hibakusha Counseling Agency of the Hiroshima Prefectural Confederation of A-bomb Sufferers Organizations and hold a meeting of the group once or twice a year. We once gathered at Hiroshima Peace Memorial Park and talked.

Some A-bomb survivors had never talked about their A-bomb experiences before joining the group. But the more meetings we had, the more relaxed they became. They began to share their experiences, saying things like, “To tell the truth, I experienced the bombing over there.” One A-bomb survivor asked for my advice, telling me, “I still dream about the bombing, and this terrifies me.” It reminded me that A-bomb survivors had suffered trauma, as you would expect. Because I believe that caring for our mental health is the most important thing for survivors, I sometimes attend lectures given by a clinical psychotherapist.

The Motomachi district and the Hakushima district are located in the central part of the city. Before the war, many military facilities were clustered in these areas, which were the stronghold of the military city of Hiroshima. After the war, the two districts were transformed into public housing tracts where war repatriates and those who became separated from their families due to the atomic bombing could live. At first, there were many illegal makeshift dwellings, but the districts were redeveloped into an area with mid- to high-rise apartment buildings by 1978.

Hope for participation by young people

Compared to other districts, there are more A-bomb survivors in this area because those who were living in the makeshift homes continued to reside here even after the apartment buildings were constructed. They are now aging, and many of them are alone, without family members or relatives to turn to. Those in my generation are younger members among these A-bomb survivors. So we need a local group where we can casually drop by in [traditional Japanese] clogs.

Ms. Tando hasn’t held a meeting of the group this year, because some members have fallen ill and others have entered assisted-living facilities.

I also have a liver ailment and take medicine every day. This year I’ve suffered from the summer heat, too. It’s hard to keep up our activities now, because we’re getting so old and we’re often feeling poorly. I’d like to ask how everyone is doing, even just once a month, but, in reality, it isn’t easy to do...

I hope young people will join our group as volunteers. If we can talk about the atomic bombing while interacting with young people, it would enable us to hand down the A-bomb experience, too.