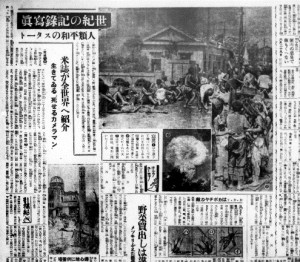 The photos I took at Miyuki Bridge on the day of the atomic bombing first appeared in the “Evening Edition Hiroshima” on July 6 of the following year. August 6, the first anniversary of the bombing, was just a month away, but I hadn’t thought of using them.

A close friend of mine, one of my colleagues, suggested that we use the photos, the two photos I took at Miyuki Bridge. And he wrote the article to accompany them.

With the General Headquarters of the Allied Occupation Forces (GHQ) supporting the launch of new newspapers by distributing newsprint, the “Evening Edition Hiroshima” printed its first issue on June 1, 1946, as a self-supporting evening paper affiliated with the Chugoku Shimbun. It had a circulation of 30,000.

I don’t know who told the GHQ about the photos, but I think the day after the article appeared in the paper, the GHQ summoned us, the photographer and the reporter, to its office. I volunteered to go, and I went alone.

I wasn’t at all afraid. As I had hoped, they weren’t angry and I didn’t get scolded. They just said that it was all right to run the article and the photos, but they wanted us to inform them beforehand in cases like this. They didn’t tell me to write an apology or anything.

U.S. had a flexible attitude

The GHQ official was about 27 or 28 and had blond hair. I think we talked to each other through an interpreter. He was magnanimous and his words were much softer than I had expected. He asked me to give him prints of the Miyuki Bridge photos, so I went back to the company and printed them. I handed the photos to him within an hour.

In September 1945, the GHQ issued a press code, placing restrictions on the Japanese media. Critical comments against the occupation were subject to control.

The press code during the war, by Japanese authorities, was much stricter. Most of the photos taken outdoors had to be approved by the military brass. If a photo showed a ridge line, we couldn’t use it. But the U.S. military had a completely different attitude from that of Japanese authorities. The Japanese military policemen were stubborn and had no flexibility, but the U.S. officers took a flexible approach.

When the occupation ended in April 1952, after more than six years, numerous books and magazine articles on the atomic bombing were published, as if the flood gates had been opened.

When the press code was lifted, I could take any photos I wanted. I didn’t have to worry anymore, and I felt so relieved. It was just like the time we could turn the lights back on when the blackout order was lifted after the war. It was a feeling of liberation.

The photos I took near Miyuki Bridge appeared in Life, an American magazine, a book published by Iwanami Shoten, and other publications. It was the first time the photos were published since the “Evening Edition Hiroshima.” In retrospect, I wish they had been brought out to the world earlier. Their role of conveying the horror of the world’s first nuclear attack will never be fulfilled until all nuclear arms are abolished from the earth. I hope my photos can continue to have an impact out in the world.