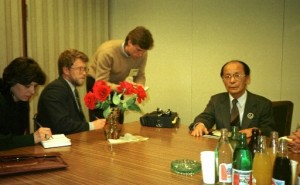 Resolved to tell A-bomb experience until the end

The horror of the atomic bombing can never be overstated. What I saw while walking through the center of the city on that day could be summed up in one word: hell. I remember one swimming pool at a school, probably in the Senda-machi area. The day before the bombing, the pool was full of water, but all the water was now gone, evaporated, and several bodies were lying there on the bottom.

Victims in a miserable state were not photographed

The most miserable sight I came across was in a streetcar bound for Hiroshima Station. It had come to a halt in the Kamiya-cho district. Inside the streetcar were about 14 or 15 people. They were dead, pressed up to the front of the car. The scene showed the tremendous force of the blast.

I put my foot on the step and looked inside. Some of the victims still had their eyes open, like they were watching me. When I looked into the viewfinder to take pictures, my colleague told me not to. In fact, I was wondering myself if I should photograph the scene or not, so I decided that I wouldn’t. If I had been alone, I might have.

After the war, Mr. Matsushige made trips to nuclear weapon states, including the United States and China. He showed the photos he took on the day of the atomic bombing and called for the elimination of nuclear weapons. In 1987, he shared his experience at the World Congress of the International Physicians for the Prevention of Nuclear War (IPPNW) held in Moscow, the capital of the former Soviet Union.

I talked about walking through the city on that fateful day. At the end of my speech, before an audience of around 3,000 people, I touched on the children who were affected by the bombing.

Children looked for their parents after returning from evacuation

In October of 1945, many children who had been evacuated earlier to the northern part of Hiroshima Prefecture, to ensure their safety, returned to Hiroshima after the war ended. Some of the children were met by family members at the train station, but others had lost their whole family and no one was there to pick them up.

They were dazed, looking about at other children who were overjoyed to see their loved ones again. I felt so sorry for them that I couldn’t take any pictures. I guess there were about ten of those children. Most of them were speechless, but some were sobbing.

This is the story I told at the conference, and I said, “Atomic bombs are awful, of course, but war itself is awful. Please take action to create a peaceful world and realize peace for the whole human race.”

It was a short speech, but I think I was able to convey my thoughts. I was glad when the applause went on and on.

Mr. Matsushige recently held a photo exhibition about the atomic bombing and shared his A-bomb account with junior high school students in Tokyo.

I’m worried that young people know nothing about the atomic bombing or the war. If another war breaks out, nuclear weapons could be used. Therefore, nothing like a war should ever be fought, no matter how small it is. If we allow memories of the war to fade away, there could be irreversible consequences. I truly hope the younger generation will learn more about what happened. That is why I’ve been holding photo exhibitions for more than 20 years.

To exaggerate a bit, I wouldn’t mind if I collapsed while telling my A-bomb experience. I have a firm resolve to continue speaking out until the end. I never thought this way when I was healthy, but I’m 88 now and I would be satisfied if I died while conveying my account.