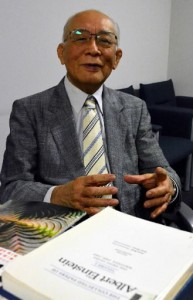 Michiji Konuma, 84, professor emeritus at Keio University, served as the chairperson of the organizing committee of the Pugwash international conference held in Hiroshima in 1995 and is also a member of the committee for this year’s conference in Nagasaki. The Chugoku Shimbun interviewed Dr. Konuma, a resident of Yokohama, on the significance of holding these international conferences in the cities that experienced the atomic bombings and the subjects for discussion at the gathering this year.

What is the role of the Pugwash conferences?
This is symbolized by one sentence that appears in the Russell-Einstein Manifesto: “Remember your humanity, and forget the rest.” This means that scientists around the world, no matter their political orientation or their nation, should join hands to eliminate nuclear weapons and the danger they pose to human life. In the past, the conferences provided an opportunity for the United States and the former Soviet Union to engage in dialogue amid the nuclear arms race during the Cold War. The conferences have also invited high government officials to attend in order to increase the influence of the Pugwash Conferences on the policies of governments. Seeing is believing, and when people visit the A-bombed cities, even those who believe that it’s difficult to swiftly eliminate nuclear weapons are shocked by the harmful effects of radiation on human health. This gives people a greater sense of urgency and willingness to take part in serious discussions from a humanitarian point of view.

Compared to the two previous conferences that took place in Hiroshima, how do you view the current conditions involving nuclear weapons?
Following the end of the Cold War, the declaration adopted at the 1995 conference was optimistic, saying that there was now the opportunity of advancing toward the goals of eradicating nuclear arms and determining solutions to international disputes that don’t involve war. Five months later, the Nobel Peace Prize was awarded to the Pugwash Conferences, which drew the world’s attention. But the situation worsened after the terrorist attacks in the United States in September 2001. At the conference in 2005, concerns were expressed about the risk of nuclear materials falling into the hands of terrorists. In recent years, people are also concerned about efforts by the United States and other nations to shore up their nuclear arsenals. Though they may reduce the numbers of their nuclear weapons, they’re seeking to maintain or improve their quality.

What will be the focus of this year’s conference?
Non-nuclear-weapon states have led discussions to promote the conclusion of a nuclear weapons convention. As a result, the international community is gaining a better understanding of the humanitarian consequences of nuclear arms. We should use and expand the scientific knowledge in this area and strengthen our cooperation with people and non-governmental organizations that are supportive of this cause.

But a nuclear weapons convention is not the final goal. The Russell-Einstein Manifesto said such an agreement is the first step, but it also stated: “Whatever agreements not to use H-bombs had been reached in time of peace, they would no longer be considered binding in time of war, and both sides would set to work to manufacture H-bombs as soon as war broke out.” In order to avoid a nuclear war, we must discuss peaceful ways to solve regional conflicts, which could trigger such a war.

What roles can Japanese scientists play as scientists from the country that experienced the atomic bombings?
The Yukawa-Tomonaga Manifesto, which was issued at the Kyoto symposium held by the Pugwash Conferences in 1975, called for breaking away from the theory of nuclear deterrence, which hinders the elimination of nuclear weapons. But after 40 years, the Japanese government still views the U.S. nuclear umbrella as necessary. We must continue conveying our message that human beings cannot co-exist with nuclear weapons.

On the other hand, it is worrisome that interest in nuclear abolition is waning as fewer and fewer scientists know the history of the anti-nuclear weapons movement. As the situation surrounding employment at universities becomes tougher, more and more young people feel the expectation of producing worthy results and cannot afford to give thought to their social mission. The origin of the conferences is in Hiroshima, Nagasaki, and Bikini. By holding lively discussions, I hope to hand down the history of the conferences.

Michiji Konuma
Born in Tokyo in 1931. Earned a Ph.D. from the University of Tokyo Graduate School. His special fields of study: theory of elementary particles, science and society. Served as a member of the council of the Pugwash Conferences on Science and World Affairs from 1992 to 2002. Member of the Committee of Seven for World Peace Appeal.

March 1954: Crew members of the Daigo Fukuryu Maru (The Lucky Dragon No. 5), a Japanese tuna fishing boat from Yaizu, Shizuoka Prefecture, are exposed to radioactive fallout from a U.S. hydrogen bomb test at Bikini Atoll in the Marshall Islands.

July 1955: Eleven prominent scientists issue the Russell-Einstein Manifesto, a statement that calls for the peaceful settlement of conflicts and the elimination of nuclear weapons.

July 1957: Following the spirit of the manifesto, the first meeting of the Pugwash Conferences is held in Canada. Twenty-two scientists hold discussion on the perils arising from nuclear weapons and other subjects.

August 1975: The Pugwash Symposium is held in Kyoto. Dr. Hideki Yukawa and Dr. Shinichiro Tomonaga, both Nobel Prize laureates, and others issue The Yukawa-Tomonaga Manifesto, criticizing security based on the theory of nuclear deterrence.

November 1989: The Berlin Wall, a symbol of the Cold War between East and West, is torn down.

May 1995: An indefinite extension to the NPT is fixed.

July 1995: The 45th Pugwash international conference is held in Hiroshima, the first such conference in Japan. The Hiroshima Declaration is adopted. The declaration refers to the reduction of nuclear arms following the end of the Cold War and states that the world can make decisive progress toward the goals of eliminating nuclear weapons and war.

December 1995: Joseph Rotblat, then president of the organization, and the Pugwash Conferences are awarded the Nobel Peace Prize. The Nobel Committee says, “They have brought together scientists and decision-makers to collaborate across political divides on constructive proposals for reducing the nuclear threat.” It also refers to the Hiroshima Declaration.

September 1996: The Comprehensive Nuclear-Test-Ban Treaty (CTBT) is adopted at the UN General Assembly. The CTBT is still pending.

September 2001: Terrorist attacks are carried out in the United States.

January 2003: North Korea declares its withdrawal from the NPT.

July 2005: The 55th Pugwash international conference is held in Hiroshima. The Hiroshima Declaration is adopted. The declaration refers to the threat of terrorism and calls for strict control and disposal of nuclear substances. It also urges a nuclear weapons convention.

March 2011: An accident occurs at the Fukushima No. 1 nuclear power plant.

May 2015: The NPT Review Conference breaks down.

November 2015: The Pugwash International Conference is held in Nagasaki.