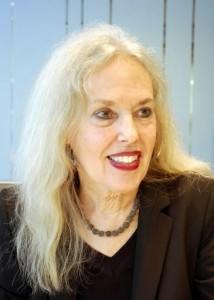 “Nuclear weapons cannot co-exist with the fundamental principles of democracy.” Elaine Scarry, a professor at Harvard University, has been advocating the abolition of nuclear arms, attracting attention in the United States by focusing on aspects of the U.S. Constitution. Professor Scarry was invited to speak at an event connected to the World Nuclear Victims Forum, which will be held at the International Conference Center Hiroshima from November 21 to 23. The Chugoku Shimbun took this opportunity to interview Professor Scarry on her thoughts.

Addressing the issue of nuclear weapons through not only international law but also the national law of the United States, the nuclear superpower, seems like an unusual approach. Could you explain?
Article 1, Section 8 of the U.S. Constitution states that Congress shall have the power to declare war. This means that the U.S. government must clear the major hurdle of considerable discussion and approval by the legislative body before it can declare war. But as far as nuclear weapons are concerned, the president and 20 aides at most can decide behind closed doors whether a weapon that can kill millions of people should be used. The foundation of democratic governance does not function in such conditions.

Following World War II, the United States has not had a congressional declaration of war. The advent of nuclear weapons has altered the way the country wages war.

Another point is the Second Amendment, which protects the right of the people to bear arms. This might be hard for the Japanese people to understand, since Japan has a pacifist constitution.

Could you elaborate?
The Second Amendment is raised in the debate over gun control. What this provision implies is that the right to self-defense is distributed equally among all Americans. If the nation is to wage war to defend itself, the U.S. government must have the approval of the public. This is incompatible with the idea of the president being the only one empowered to make a decision on the use of nuclear weapons.

In the first place, protecting one’s life is a fundamental right for all individuals. When nuclear weapons are used, they eliminate everyone’s right to self-defense. Such weapons produce inhumane and catastrophic outcomes.

Is it not possible to possess nuclear weapons without undermining the principles of democracy?
It’s impossible that both Congress and the people would make the deliberate decision to allow the use of a weapon of mass destruction. Democracy and nuclear weapons are mutually exclusive. So such weapons must be eliminated. This applies to all nuclear weapon states.

Past American presidents have seriously contemplated using nuclear weapons: John F. Kennedy three times and Richard Nixon four times. The American people, though, aren’t really aware of how terrible nuclear weapons are. They’re not aware that their lives are at risk at this very moment. In reality, the United States has 7,000 nuclear weapons, and 2,000 of these are on alert for a first strike.

Some A-bomb survivors and Hiroshima citizens are frustrated that the American people show little interest in this issue.
During my stay in Hiroshima, I have visited the A-bomb museum twice. I was greatly impressed by the large number of students visiting the museum on their school trips. You should be proud that the voices of the survivors have been heard. We need the same kind of museum in the United States. It’s vitally important that the American people listen to the survivors.

Fostering sympathy with those who share the same goal of abolishing nuclear weapons isn’t enough. What words, music, or visual imagery can we use to help more people understand this problem? We must all work to find the frequency in which our voices will become audible to the American people. But we have not yet found the right frequency.