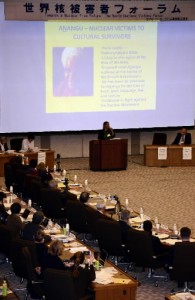 The World Nuclear Victims Forum opened at the International Conference Center Hiroshima, in Naka Ward, on November 21. The participants will convey messages from nuclear victims in various parts of the world and consider ways to eliminate the damage caused by nuclear weapons and radioactive fallout. The three-day international forum, led by anti-nuclear citizens’ groups from Hiroshima and Nagasaki, was organized in the year marking the 70th anniversary of the atomic bombings. On the first day of the gathering, the sufferers of nuclear tests, nuclear accidents, and depleted uranium bombs reported on the reality of the damage caused by radiation exposure.

The first day of the forum was attended by approximately 300 people, including 17 participants who were invited to Japan from nine other nations. At the opening ceremony, Haruko Moritaki, the co-chair of the Hiroshima Alliance for Nuclear Weapons Abolition and the head of the forum’s executive committee, stressed that nuclear weapons and nuclear power produce victims at every stage of the nuclear cycle and violate the rights of human beings to live in safety and peace. People should raise their voices together to end the nuclear era, she said.

In the session where reports were made on the damage caused by nuclear radiation in various parts of the world, there were five themes, including the “Hiroshima and Nagasaki Atomic Bombings” and “Nuclear Accidents/Nuclear Labor.” In the presentation entitled “Uranium Mining,” Ashish Birulee, 24, a photojournalist from Jadugoda, a village in northeastern India where state-run uranium mines are located, said that many children in the village suffer from congenital disorders and that some villagers are unable to find a marriage partner, simply because they come from Jadugoda.

Mary Dickson, 60, then spoke about “Nuclear Testing.” Ms. Dickson is a resident of Salt Lake City, Utah and the head of a group of American citizens who live downwind from the atmospheric nuclear test site in Nevada. She related her experience of being diagnosed with thyroid cancer at the age of 29, and said that the U.S. government exposed the residents to radiation without informing them of the risks. She urged all nuclear sufferers to stand together to ensure that such tragedies will never be repeated. An Iraqi doctor who examines victims of radioactive fallout from depleted uranium bombs, as well as a sufferer of the accident at the nuclear power plant in Fukushima Prefecture, also talked about the reality of damaging health effects from radiation exposure.

On November 22, the forum will discuss the health problems caused by nuclear radiation and the goal of banning nuclear weapons. On the final day, it will adopt the World Charter of Nuclear Victims’ Rights.