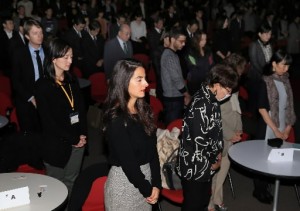 The Hiroshima International Film Festival opened on November 20 in downtown Hiroshima. With a French organization taking part in this year’s festival, there were a number of people from France at the opening ceremony. Some 200 participants offered a silent prayer for the victims of the terrorist attacks in Paris and, from the A-bombed city, renewed their determination to help realize a peaceful world.

With the cooperation of the Cinematheque Francaise, a film museum in Paris, and other organizations, more than 40 of the 88 films to be screened at this year’s festival are French films. At the opening ceremony held at the NTT Cred Hall, Francine Meoule, the director of the Institut Francais Kyushu, a cultural organization run by the French government, addressed the audience. Ms. Meoule said that, now more than ever, we must reject fear, division, and hatred and instead stress life, culture, sharing, and respect. Toward that end, she emphasized the importance of using the power of cultural expression, including film, to stand strong against brutality.

In his remarks, Hiroshima Mayor Kazumi Matsui said, “I hope Hiroshima and this festival can be a bridge between nations in our pursuit of precious peace.” Kyoko Heya, the head of the film festival, declared the event open and a ceremony where a barrel of sake was opened took place with six people, including Yoshishige Yoshida, a film director and the presiding judge in the competition for short films. A silent movie was then screened to the accompaniment of a piano that survived the atomic bombing of Hiroshima.

Prior to the opening ceremony, about 20 participants from home and abroad visited the Hiroshima Peace Memorial Park and offered flowers at the Cenotaph for the A-bomb Victims.

The film festival will be held at two halls in the NTT Cred Hall and two other venues in Hiroshima, until November 23. On November 21, Mr. Yoshida’s film will be shown and the director will speak. The film Arabian Nights, directed by Muguel Gomes, will be screened for the first time in Japan and the Portuguese director will appear on stage each day of the festival. On the last day, November 23, there will be a discussion with actors Tomoya Nagase and Shota Sometani and an awards ceremony.