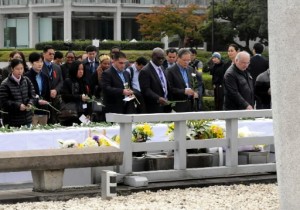 Prior to the opening in Hiroshima of an international symposium to consider ways to use telecommunications, Cabinet-level officials from participating countries visited Peace Memorial Park on November 29 and laid flowers at the Cenotaph for the A-bomb Victims. They were accompanied by Sanae Takaichi, Minister of Internal Affairs and Communications, who will also attend the symposium. The officials also heard the account of an atomic bomb survivor and learned about the devastation caused by the A-bombing.

The group consisted of approximately 130 Cabinet members and government officials from about 50 countries, including Ethiopia and Tonga. Hiroshima Mayor Kazumi Matsui guided them to the cenotaph, where they laid flowers and observed a moment of silence. They then heard the account of Hiroshima resident Keiko Ogura, 78, an atomic bomb survivor, who spoke to the group in English. They also visited the Peace Memorial Museum, where they saw the personal possessions of A-bombing victims and a model of the city center just after its destruction. Ms. Takaichi told the press corps that the participants from overseas had learned of the horrors of war.

The 13th World Telecommunication/ICT Indicators Symposium sponsored by the International Communication Union will be held from November 30 through December 2 at a hotel in Hiroshima’s Minami Ward. Approximately 350 representatives of about 100 countries will participate in discussions. This marks the first time the conference is being held in Japan.