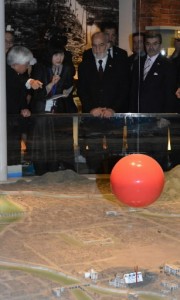 Dr. Ibraham Al-Jaafari, 68, Iraq’s foreign minister, visited the Hiroshima Peace Memorial Park on November 26 and touched the devastating reality of the atomic bombing first-hand. With terrorist attacks by the so-called Islamic State, the militant extremist group, recently taking the lives of many civilians, Dr. Al-Jaafari called for the world to prevent war from breaking out based on the lessons learned from Hiroshima.

Dr. Al-Jaafari toured the Peace Memorial Museum, guided by Kenji Shiga, the museum director. The foreign minister asked Mr. Shiga about the number of victims while standing in front of a panoramic model of the devastated city center, and gazed at a charred lunch box on display. Dr. Al-Jaafari wrote in the museum guest book in Arabic: “Nuclear weapons destroy people’s lives in an instant. This must never happen again.” To reporters, he emphasized that a visit to Hiroshima by people from other countries would help lead to peace for the human race.

He offered flowers at the Cenotaph for the A-bomb Victims and observed a peace education class at Nakajima Elementary School nearby. He also met with Hiroshima Mayor Kazumi Matsui at City Hall, and expressed his intention of encouraging cities in Iraq to become members of Mayors for Peace.

Dr. Al-Jaafari arrived in Japan on November 22 at the invitation of Japan’s Ministry of Foreign Affairs. After the Iraq War, he served as prime minister of Iraq’s transitional government until the official government was established in May 2006.