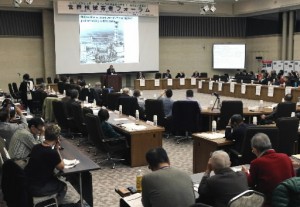 The World Nuclear Victims Forum held its second day of proceedings at the International Conference Center Hiroshima on November 22. The forum has been designed to discuss the problems of nuclear sufferers who are produced in every stage of the development and manufacturing of nuclear weapons, as well as through nuclear accidents. On this day, the forum was attended by around 250 people, including doctors and researchers who specialize in the effects of radiation on human health and those who were exposed to radiation.

In the session entitled “The Science of ‘Hibaku’ (Radiation Exposure),” Anatolii Chumak, the vice director at the National Research Center for Radiation Medicine in the Ukraine, reported on the health problems caused by the accident at the Chernobyl nuclear power plant when this nation was part of the former Soviet Union. According to Mr. Chumak, in addition to solid cancers of the thyroid gland and other organs, an increasing number of other thyroid-related diseases and circulatory diseases have been found among people exposed to the radioactive fallout in that area. Mr. Chumak also said that chronic lymphoid leukemia has been confirmed to be induced by radiation exposure.

The keynote address was delivered by Hiroaki Koide, a former assistant professor at the Kyoto University Research Reactor Institute. He pointed out that the amount of Cesium 137 released into the atmosphere following the atomic bomb dropped on Hiroshima was 10,000 times less than the amount of Cesium 137 emitted by nuclear tests undertaken during the Cold War period, and 170 times less than the amount released so far by the Fukushima No. 1 (Daiichi) nuclear power plant. Professor Koide stressed that the use of nuclear power, whether for military aims or peaceful purposes, will invariably produce victims, and he urged the people of all radiation-damaged sites to call for the abolition of nuclear arms and materials along with all use of nuclear power.

In another session, the participants discussed potential ways to create a legal ban on nuclear weapons. One member of the audience suggested that a nuclear abolition campaign should be developed based on the viewpoint of nuclear victims, as well as from the perspective of international politics.

The forum has been organized by citizens’ groups in Hiroshima and Nagasaki. On November 23, the last day of the gathering, the participants will adopt a declaration calling for the solidarity of nuclear sufferers and the realization of a world which creates no more nuclear victims.