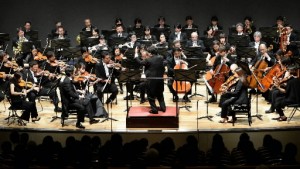 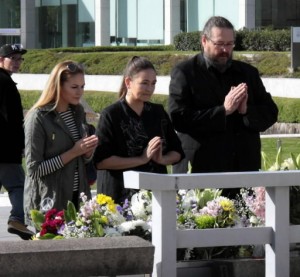 On November 16, the Second Symphony “HIROSHIMA” by Erkki Aaltonen, a Finnish composer, was performed in Hiroshima for the first time in 60 years. The executive committee of “Hiroshima and Music,” a citizens’ group which has been collecting music materials related to Hiroshima, uncovered this piece which had been stored backstage. The Hiroshima Symphony Orchestra then replayed the symphony in an event sponsored by the City of Hiroshima to mark the 70th anniversary of the atomic bombing. About 700 people in the audience listened closely to the music, which was imbued with Mr. Aaltonen’s thoughts toward the A-bombed city of Hiroshima from far away in northern Europe.

Mr. Aaltonen composed the symphony in 1949, four years after the atomic bombing. This was the second performance of the piece in Hiroshima. In 1955, the Kansai Symphonic Orchestra (today the Osaka Philharmonic Orchestra), conducted by the late Takashi Asahina, gave the first performance at a public hall located in the Peace Memorial Park. Mr. Aaltonen had entrusted Mr. Asahina with his work.

The new performance was held at the JMS Aster Plaza in Naka Ward. Yumi Notohara, 44, the chair of the executive committee, appealed to the audience by saying, “This symphony has helped establish an emotional bond between Mr. Aaltonen and the people of Hiroshima. I hope this concert will provide the opportunity to share our thoughts on Hiroshima, nuclear weapons, and our future through music.”

After Ms. Notohara’s words, the orchestra, under the direction of Ken Takaseki, the group’s former music director and former permanent conductor, led the musicians in filling the hall with powerful tones which expressed the A-bomb explosion and the dynamic efforts made by the people of Hiroshima to rise above the catastrophe.

In the second part of the concert, the Sixth Symphony “HIROSHIMA,” which was composed by Ikuma Dan to mark the 40th anniversary of the atomic bombing, was performed. With guest performers Hisami Namikawa singing soprano and Michiko Akao playing the fife, Hiroshima’s recovery and reconstruction was powerfully conveyed through this piece. The concert was sponsored by the Chugoku Shimbun and other organizations.


Aaltonen’s son visits Japan for first time in connection with performance
Markus Aaltonen, 62, the second son of composer Erkki Aaltonen, visited the Peace Memorial Park with his family on November 16.

It was Markus Aaltonen’s first visit to Japan, and together with his wife and daughter, he listened to the symphony that his father had dedicated to Hiroshima. Offering flowers to the Cenotaph for the A-bomb Victims, he put his hands together in prayer. Accompanied by Yumi Notohara, the chairperson of the executive committee of “Hiroshima and Music,” Mr. Aaltonen and his family visited the Atomic Bomb Dome and the Peace Memorial Museum. Touching the tragedy of the atomic bombing in person, he said that it was hard to express his feelings in words. At the concert, he listened to his father’s symphony with tears in his eyes, and remarked that he thought his late father would be very happy.