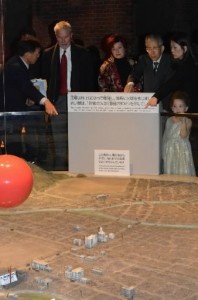 Barry Ladendorf, 73, the president of Veterans for Peace, visited the Hiroshima Peace Memorial Park for the first time on November 27. He was guided by Akiko Mikamo, 54, a second-generation atomic bomb survivor who is originally from Higashi Ward, Hiroshima. Both now live in the U.S. state of California. Ms. Mikamo shared her family members’ accounts of the atomic bombing at a gathering of the veterans’ group in August, where their friendship was born. They have since strengthened their determination to make the inhumanity of nuclear weapons more widely known.

Mr. Ladendorf was in the U.S. Navy for five years in the latter half of the 1960s, serving in the Vietnam War and overseeing inspections of nuclear weapons. After his retirement from military service, Mr. Ladendorf became a legal officer before joining Veterans for Peace, which seeks to eliminate nuclear weapons and war. He has served as president of the group since 2011. Veterans for Peace was established in 1985 and has a membership of about 10,000.

Mr. Ladendorf toured the Hiroshima Peace Memorial Museum, guided by Noriyuki Masuda, the museum’s deputy director. In front of a panoramic model which depicts the devastation to Hiroshima’s city center in the wake of the atomic bombing, he listened to explanation from Ms. Mikamo about Shinji Mikamo, 89, Ms. Mikamo’s father. After the tour of the museum, he placed a floral tribute at the Cenotaph for the A-bomb Victims. At a press conference held at City Hall, Mr. Ladendorf said that it was heartbreaking to see the inhumane destruction of the city. He admitted that many U.S. veterans believe the atomic bombings were justified and said that every person in the world, including the leaders of each nation, should visit Hiroshima. Ms. Mikamo said that she wants people to understand that nuclear weapons are an absolute evil.