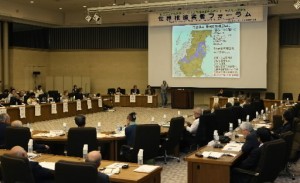 On this day, about 200 people from nine countries attended the forum. The Hiroshima Declaration states that, until the nuclear era has ended, any person could become a nuclear victim at any time, and reaffirms that human beings and nuclear power, in the form of both nuclear weapons and nuclear energy, cannot coexist. It calls for ending all use of nuclear energy along with concluding a nuclear weapons convention to legally ban nuclear arms and prohibiting the possession of depleted uranium weapons.

The “Draft Elements of a World Charter of the Rights of Nuclear Victims,” which is based on the Hiroshima Declaration, states that never being exposed to any kind of radiation except natural radiation or that for medical purposes and never having to be subject to radiation in the course of one’s work is a human right. It also states that nuclear victims have the right to demand apologies and compensation for the damage done to their lives, health, and finances, as well as their suffering, from the party that caused the radiation exposure, and to never be disadvantaged as a result of not being able to return to their homes due to environments contaminated by radiation. The document will be made in public in draft form so that it can be developed further and used around the world in accordance with the needs of people who are taking action against the damage caused by radiation exposure.

On the final day of the forum, after summarizing the discussions of the previous two days, the participants discussed “How to Develop a Nuclear Victims’ Network Hereafter.” With regard to the issues surrounding nuclear energy, it was reported that a liability lawsuit has been filed against the manufacturers of nuclear power plant facilities at the Fukushima No. 1 (Daiichi) nuclear power plant. It was also reported that efforts to extend support for the victims of the Fukushima nuclear accident are being pursued. In the discussion concerning steps to advance the abolition of nuclear arms, it was suggested that momentum toward creating a nuclear weapons convention be strengthened based on the “inhumane nature of nuclear weapons,” rather than waiting for action to be taken by the nuclear weapon states.

The World Nuclear Victims Forum was organized by citizens’ groups from Hiroshima and Nagasaki. It also adopted an appeal called “Never Forget Fukushima, Never Again” to keep the memory of Fukushima alive and prevent a similar nuclear disaster.


Commentary: Draw attention to radiation exposure in every part of the world
There are people in the world who are compelled to work under conditions in which they are unnecessarily exposed to radiation. As a consequence, they are deprived of healthy and peaceful lives and a heavy toll is taken on the life of their communities. These realities, however, are given short shrift. The World Nuclear Victims Forum, which took place in the A-bombed city of Hiroshima, has shed light on the reality of places in the world that are contaminated by radiation, threatening the fundamental human rights of the people who live there.

The uranium mines in India, the sites in Australia where the United Kingdom carried out nuclear tests, and Fukushima Prefecture, which experienced a nuclear accident... In such places, the use of nuclear power, whether for military use or civilian use, is unacceptable in the sense that it constantly carries the risk of radiation exposure. The less this reality is addressed, the more victims there will be. The situation is of grave concern for us all, no matter where we live.

The obstacles to eliminating nuclear weapons and nuclear energy are high. But no matter how slow our progress is, we must convey the voices of nuclear victims as widely as possible so they will stir the hearts of people around the world.

To realize this gathering, citizens of the world who are engaged in grassroots activities came together and were able to work through the challenges to achieve their aim. We must now continue the success of this forum and do whatever is required to develop a global network that will help create “a world without hibakusha, or nuclear victims.” Seventy years have passed since the atomic bombs were dropped on two Japanese cities. It is the mission of the people of Hiroshima and Nagasaki to draw the world’s attention to radiation exposure in every part of our planet.