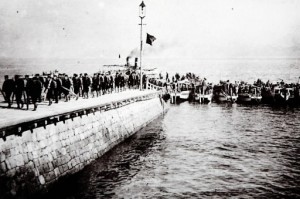 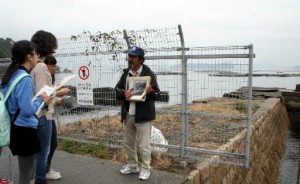 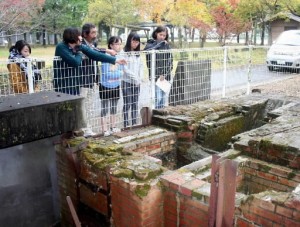 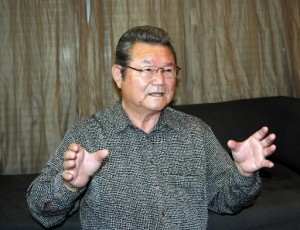 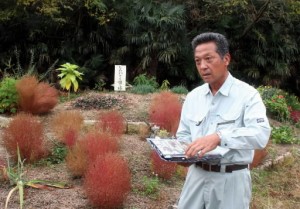 Part 22: Past and present of Ninoshima Island convey memories of war and atomic bombing
It is estimated that 10,000 people who were injured in the atomic bombing were brought to Ninoshima Island shortly after the attack on August 6, 1945. This is because, 70 years ago, the island had many military facilities and some were used as temporary field hospitals. Many of these people died on the island without ever seeing family members again, then were cremated or buried there.

The island tells not only the horror of the atomic bombing, but also the fact that Hiroshima was a military city. Hiroshima began its transformation into a military city 120 years ago, when an army quarantine station (First Quarantine Station) was built on Ninoshima Island shortly after the outbreak of the Sino-Japanese War. With Ujina Port (now Hiroshima Port in Minami Ward), Hiroshima was once a major hub of military transportation, and Ninoshima Island was the gateway to Hiroshima. Many prisoners of war caught by the Japanese army were also brought to Ninoshima Island. A facility to train maritime “kamikaze” attackers was built there in the final stages of the Pacific War.

Ninoshima Island was once a site engaged in the wars Japan waged in modern times, but it is now a place where people enjoy fishing, camping, and other outdoor activities. We walked around the island to visit the remnants of war-related facilities, and contemplated the preciousness of peace.


Island tells memories of war and atomic bombing
Ninoshima Island is a 20-minute ferry ride from Hiroshima Port. It is a small island with a population of 800 and a circumference of 16 kilometers. Kazuo Miyazaki, 67, who lives on the island and studies its history, served as our guide. Chisato Akiyama, 30, and Kayo Onuki, 27, who are from Shizuoka and Fukuoka prefectures respectively, joined us. Ms. Akiyama and Ms. Onuki moved to the island in October through a project sponsored by the Ministry of Internal Affairs and Communications which seeks to help revitalize provincial areas.

In the eastern part of the island is Ninoshima Gakuen, a child welfare facility. It opened as the Hiroshima Prefectural War Orphans Foster Home in 1946, one year after the atomic bombing. But 120 years ago, an army quarantine station was established where Ninoshima Gakuen now stands. Soldiers returning from war were examined at the facility to check if they had contracted any infectious diseases, such as cholera.

An old photo shows soldiers arriving at a masonry pier, which still exists. The coast was crammed with military facilities. It is hard to imagine that there were once scores of soldiers on this now quiet island.

Seventy years ago, people who suffered burns in the atomic bombing were brought from central Hiroshima to the island by boat and taken to quarantine stations and other facilities. In the event of an emergency, there was a plan to use the quarantine stations as temporary field hospitals. It is believed that many of the 10,000 people brought to the island died without ever returning to their homes. So many bodies were in need of cremation that not a few of them had to be buried in pits, without being cremated.

Near the children’s nature center are the remnants of a facility where horses used in the war effort were cremated. They were found buried at the site of the former army equine quarantine station and were moved to the present location in 1990. Human corpses were also cremated at this facility for animals, and their bones have also been found. It is as if the red brick incinerator tells us that conditions at the time were so chaotic that the victims had to be handled without care, and that this is part of war.

There is an old well near the ruins of the incinerator. It is said that the victims drank water from this well before they died. Mr. Miyazaki told us, “The entire island is a graveyard for the victims of the atomic bombing. This is not just a tranquil island.” Touring the island made us feel that we must learn about the history of wars and the atomic bombing. It is also important to preserve the ruins of war-related facilities. (Anna Primus, 13, and Miki Meguro, 12)


Scene of victims begging for war seared into four-year old’s mind
Kunichi Fujimoto, 74, a resident of Naka Ward, was just four at the time of the atomic bombing. But he saw such brutal sights that he still vividly remembers the chaotic conditions on the island after the A-bomb attack.

He recalls going to the equine quarantine station with his grandmother to look for his aunt and other relatives who were visiting Hiroshima. The victims, lying on the floor, had burnt skin and tattered clothes. They did not have the strength to sit up so they extended their arms as they groaned for water. His grandmother carried water from the well in a bucket and used a ladle to give some to them.

“It was pure hell,” Mr. Fujimoto said. “I heard from adults that bodies were also washing up onto the beach.”

Mr. Fujimoto’s father and uncle had died in battle the year before. The transport ship his father was on was attacked and sunk near the Philippines. Losing the breadwinner of the family, the Fujimotos faced many hardships. “The atomic bombing was a by-product of the war. Never ever wage war!” he said. We must take his words very seriously. (Story written by Miyu Okada, 14; photo taken by Miki Meguro)


Remains of 85 victims excavated in 2004, others await discovery
Several excavations have been carried out on Ninoshima Island in the years after the war. In 2004, the site of the former equine quarantine station was unearthed. Kenji Sumida, 56, was involved in the excavation as a local builder. He shared his experience with us.

The equine quarantine station was one of the places where A-bomb victims were cremated or buried. In 1971, the remains of an estimated 617 victims were found in an excavation conducted on the grounds of Ninoshima Junior High School, where the quarantine station used to stand. But local residents believed that there must be more bones buried under the ground and called on the City of Hiroshima to excavate the adjacent areas.

When a power shovel scooped up its third load of dirt, Mr. Sumida saw the bones of a human thigh. He said, “It was as if the dead were saying, ‘Quick! Dig us out of the ground.’” Based on the number of skulls, it is believed that the remains of 85 people were excavated. Their belongings, such as a watch, were also discovered.

There were tiny bones, too. Two rows of teeth were found on a jawbone. They were baby teeth and the permanent teeth that had not yet appeared. Mr. Sumida said, “I’m a father myself, and it was a heartbreaking sight.” Wanting to take proper care of the spot, and keep people from treading upon it, Mr. Sumida and others made a mound after the excavation. Now the mound is cared for by locals as a place to remember the dead.

The remains of more dead may be somewhere on Ninoshima Island, and they may be calling us not to forget them, to come discover where they lie. The tragedy of the atomic bombing is not a thing of the past. (Ai Mizoue, 13)

1904: The Russo-Japanese War breaks out. The Second Quarantine Station opens.

1914: World War I breaks out. Japan occupies Qingdao, China, then a German-leased territory.

1919: Karl Juchheim, a German prisoner of war detained on Ninoshima Island, bakes baumkuchen, a German-style confection, for the first time in Japan. The confection is sent to an exhibition of works made by prisoners of war that takes place at a building now known as the A-bomb Dome.

1945: An atomic bomb is dropped on Hiroshima. The quarantine stations on Ninoshima Island are used as temporary field hospitals for 20 days.

1947: Remains of atomic bomb victims who died on Ninoshima are gathered by the City of Hiroshima. A memorial mound is made on Ninoshima Island.

1955: Remains of about 2,000 victims are exhumed from the memorial mound on Ninoshima Island and transferred to the Atomic Bomb Memorial Mound in Hiroshima Peace Memorial Park.

1971: Remains of an estimated 617 victims are found in an excavation on the grounds of Ninoshima Junior High School.

1990: Ruins of an incinerator for horses were found at the site of the former army equine quarantine station.

2004: Remains of an estimated 85 victims are gathered in an excavation close to the 1971 excavation location near Ninoshima Junior High School.

Through gathering information for this article, I learned for the first time that Ninoshima Island was deeply linked to past wars and the atomic bombing. Mr. Fujimoto told us about what happened when he was very young. Even after 70 years his memories of that time are very vivid because the experience was so shocking. (Miyu Okada)

It was my first visit to Ninoshima Island. My first impression was that the island has a lot of natural beauty. But as I listened to explanations about the island’s history, I realized that it’s a really sad place where many people who returned from war, some of them injured, were quarantined, and it was also the site that took in many people who were wounded in the atomic bombing. Ninoshima Island is part of Hiroshima City, so we must not overlook it. I will try to learn more about our city and take advantage of our peace education classes in school. (Anna Primus)

Ninoshima Island is part of Minami Ward, where I live. Through working on this article, I learned that the island is of historical importance and this history has many aspects. In elementary school, we learned about the damage caused by the atomic bomb through listening to survivors’ stories and touring buildings that survived the bombing. But the Sino-Japanese War and the Russo-Japanese War felt only like historical events in the distant past. I was surprised that traces of these wars still exist in a place not far from my home. I would like the people of Hiroshima people to know more about the relationship between Ninoshima Island and wars in Japan’s past. (Ai Muzoue)

I visited Ninoshima Island for the first time and I learned not only about the island’s history but I also felt the kindness of the local people and the emotional connection between them. When we think of the atomic bombing, we tend to only consider central Hiroshima, where the hypocenter area is. I also want to learn about the history of other islands that were affected by war and the atomic bombing. (Miki Meguro)

What is Peace Seeds?
Peace Seeds are the seeds of smiles which can be spread around the world by thinking about peace and the preciousness of life from various viewpoints. To fill this world with flowering smiles, 45 junior writers, from the sixth grade of elementary school to the second year of high school, choose themes, gather information, and write articles.