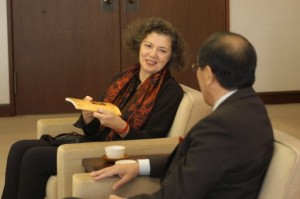 Mona Hatoum, 63, the winner of the Hiroshima Art Prize, met with Hiroshima Mayor Kazumi Matsui at Hiroshima City Hall on November 27. Visiting the A-bombed city for the first time, the Palestinian artist called Hiroshima a very impressive place. In 2017, the City of Hiroshima will hold an award ceremony at the Hiroshima Museum of Contemporary Art and an exhibition of new work to be created by Ms. Hatoum.

Ms. Hatoum was born in Lebanon. While she was in the United Kingdom, civil war broke out in her homeland, leaving her unable to return to her country. Since then, she has been creating her work from outside Lebanon, producing installations that convey the minds of people facing political oppression.

Mr. Matsui said her view of the world has something in common with that expressed in Hojoki (An Account of My Hut) written by Kamo no Chomei, a Japanese author who produced essays and poems around the year 1200. The essay describes the impermanence of worldly things during that war-torn era. Mr. Matsui gave her an English-language edition of this essay as a gift, commenting, “Hiroshima survived the period of chaos and was revived. I hope you will create new work that expresses this idea.” Ms. Hatoum said she will read the book to deepen her understanding of Japanese culture.

The Hiroshima Art Prize was established by the City of Hiroshima in 1989 and has been awarded every three years. The prize is given to artists who have contributed to peace in the world through their art.