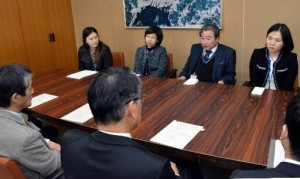 The visitors consist of two staff members from the A-bomb Sufferers Welfare Center, including its president, Gong Inbae, and two staff members from the Korean Red Cross, which operates the welfare center. They spoke with Yasuhiro Kawazoe, the director general of the City of Hiroshima’s Health and Welfare Bureau. Mr. Gong said that they would like to introduce relief measures that have been implemented in Japan but not yet pursued in South Korea.

The Korean staff listened to an explanation of how the city’s Atomic Bomb Survivors Relief Department is organized and heard an overview of the relief measures from department staff, then visited Kanda Sansou, a rest facility located in Higashi Ward. They will also visit nursing homes for A-bomb survivors in the city during their stay, which lasts until December 4.

Hapcheon is called “Hiroshima in Korea” because of its large population of A-bomb survivors who were exposed to the bomb’s radiation in Hiroshima. Japan’s Ministry of Health, Labour and Welfare asked the City of Hiroshima to train personnel who will be involved in providing support for the A-bomb survivors in South Korea. The city has conducted such training programs each year since 2002.