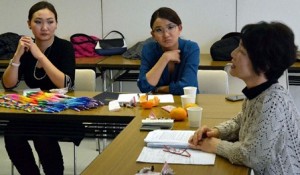 Nyamkhishig Gurgemjar, 24, and Sarnai Jigmeduren, 23, residents of Ulan Bator, Mongolia and students from the National University of Mongolia Graduate School, listened to accounts of the atomic bombing at the International Conference Center Hiroshima in Naka Ward on November 30. They are visiting Hiroshima at the invitation of the U.N. Support Association Hiroshima, a non-governmental organization (NGO) located in Naka Ward.

Toshiko Shinagawa, 70, a resident of Minami Ward and a peace volunteer, talked about the A-bomb experiences of her relatives. Ms. Gurgemjar and Ms. Jigmedsuren listened intently to Ms. Shinagawa’s stories including the experience of a female relative who was unable to save her mother, though the mother was right in front of her at the time of the atomic bombing.

The students also toured the Peace Memorial Park on the same day. They are scheduled to visit Hiroshima City Hall and return to Mongolia on December 3. Ms. Gurgemjar and Ms. Jigmedsuren, both of whom want to be teachers, said that their desire for a peaceful world grew after touching the city’s tragedy and recovery in person, and that they want to convey what they learned in Hiroshima to children in Mongolia.