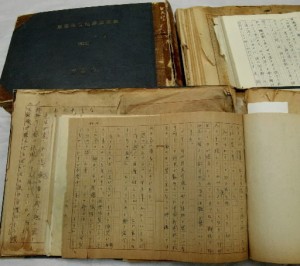 The Hiroshima National Peace Memorial Hall for the Atomic Bomb Victims is translating a collection of accounts titled Genbaku Taikenki (Experiences of the Atomic Bombing), solicited by the City of Hiroshima in 1950, five years after the A-bomb attack, into English, Chinese, and Korean and will post them online next year.

In all, there are 165 accounts of the atomic bombing. They were gathered by the city during the time of U.S. occupation and censorship over the damage wrought by the bomb. They are historical records of the horror of the Hiroshima bombing, though most have become buried over the years. Some have never been made available to the public before. The Peace Memorial Hall will begin by publishing the full text of 16 accounts after obtaining permission from the authors or family members of the authors.

Translation work involving the original manuscripts has been proceeding in conjunction with preparations for the hall’s special exhibition titled “Experiences of the Atomic Bombing: Records of the Starting Point of Hiroshima,” which will run the whole year in 2016.

The authors of the first 16 accounts include a third grader in elementary school, the chief secretary of the Hiroshima City Headquarters of the Volunteer Citizens’ Corps, and a barber who later became the director of the Hiroshima Prefectural Confederation of A-bomb Sufferers Organizations (established in 1956). They also include the grandfather of an actor from the city of Hiroshima. Among the authors, only two are alive today.

On August 6, 1945, Hatsue Higashi (née Baba), 92, a resident of Machida, Tokyo, experienced the atomic bombing while at the branch of the Hiroshima Postal Savings in the Fukuya Department Store, about 710 meters from the hypocenter. At that time she was leading a group of mobilized students in their work. She wrote about fleeing the scene with one of the students on her back, describing her experience in 14 handwritten pages.

Ms. Higashi said, “I remember feeling worked up when I wrote it. I hope that readers will understand the reality of war, and all the killing that takes place, as well as the feelings of those who survive.”

A-bomb accounts were solicited starting in June 1950. Accounts were submitted by 81 adults, including college students, and 84 children, including those who were elementary school students at the time of the bombing.

Of these, 18 accounts were published as Experiences of the Atomic Bombing on August 6, 1950 by the Hiroshima Peace Memorial Service Committee, comprised of such entities as the City of Hiroshima and the Hiroshima Chamber of Commerce and Industry. But the copies of the book were delivered only to the people who were involved in the project. At the time, the Peace Festival (today’s Peace Memorial Ceremony) was canceled because of pressure from the General Headquarters of the Allied Forces (GHQ), as the Korean War had broken out right before the festival and the book’s publication.

This book, after adding another 11 accounts, was then published under the same title in 1965 by a publisher in Tokyo and has since been reprinted. Compared to the original texts, different titles have been used for some accounts and some words have been deleted, like the changes made during the occupation period.

In 1998, the original writings were found in the Hiroshima Municipal Archives. Because the paper had deteriorated, only photocopies were shown to the public and permitted to be copied. But the handwriting can be difficult to read and some words which identify names and other things were blacked out.

For the exhibition, the hall plans to make the original writings available to the public, to the extent possible, after checking them against the digital versions made by Hiromi Hasai, 84, a resident of Saeki Ward, Hiroshima. Mr. Hasai, a professor emeritus of Hiroshima University, converted the manuscripts into electronic data in 2011 and donated his work to the City of Hiroshima.

Masaki Kano, the director of the Hiroshima National Memorial Hall for the Atomic Bomb Victims, commented, “It could be said that Experiences of the Atomic Bombing is a record of the starting point of A-bomb survivors’ accounts, which have continued to the present day. Despite living under occupation, the authors wrote with vivid emotion in condemning the bombing and expressing their strong desire for peace. The fact that the original handwritten manuscripts still exist is of great significance. In cooperation with the Hiroshima Municipal Archives, I would like to share these accounts with people both in and out of Japan.”