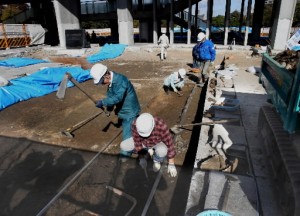 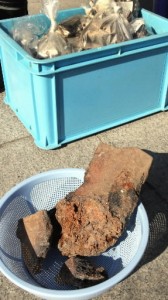 On November 27, the City of Hiroshima invited the media to an excavation carried out on the site of the Peace Memorial Museum’s main building. The remains of pre-war structures have been unearthed, including a piece of stone that is believed to be from the Nakajima district, which was destroyed in the atomic bombing, and roof tiles that were probably melted by the atomic bomb.

The excavation covers about 2,200 square meters, which was part of the Zaimoku-cho area, where many private homes, shops, and temples once stood. Commissioned by the municipal government, the Hiroshima City Culture Foundation began to conduct research in the eastern section of the site on November 20. To examine the surfaces of the ground of the post-war era, at the time of the bombing and the pre-bombing era, a one-meter-wide area was dug to a depth of about 1.5 meters in the exploratory excavation. After continued digging, a narrow stone that is more than one meter long was unearthed.

According to Norimitsu Tamura, the chief curator of the foundation, the stone might have been used as a curbstone or was part of a building. Also discovered were pieces of glass and roof tiles that may have melted under the glare of the A-bomb’s heat rays as well as pieces of broken pottery. They will be examined by the culture foundation to determine whether these artifacts were damaged by the heat rays or by the fires that broke out after the atomic bombing.

The excavation is being carried out to examine artifacts buried on the site of the museum before a seismic retrofit of the facility and will be finished by the end of next March. Mr. Tamura said, “We hope to find as many remains of the town before the bombing as possible.”