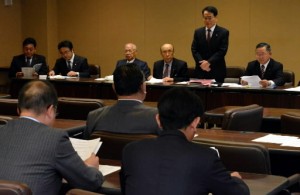 Among the 11 factions of the council, members from 10 factions except the Municipal Reform Network, took part in establishing the association. On the same day, an inaugural meeting of the group took place at the City Council building with 34 members in attendance. Noriaki Usui, a resident of Higashi Ward and a member of the faction called the Sousei (Creation) Club, was chosen chair of the association. At the meeting, the participants determined the guidelines of the group and set its mission of “contributing to peace activities in Japan and overseas.”

At a press conference held after the meeting, Mr. Usui expressed criticism of the national government’s diplomatic stance as the A-bombed nation in appealing for the abolition of nuclear arms while relying on the U.S. nuclear umbrella for the country’s security. He said, “In order to strengthen momentum for seriously discussing the abolition of nuclear weapons, our association will seek to establish a basic ordinance for nuclear abolition and work closely with other city councils throughout Japan.”