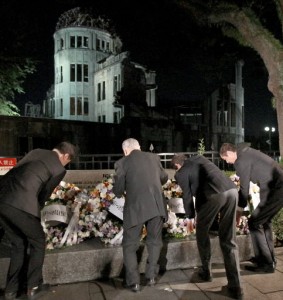 A ceremony to mark the 19th anniversary of the registration of the Atomic Bomb Dome as a World Heritage site was held on December 7. In response to a call by the Hiroshima Peace Liaison Conference for Nuclear Abolition, consisting of 12 organizations including A-bomb survivors’ organizations and the Hiroshima Chapter of the Japanese Trade Union Confederation (RENGO), some 100 people gathered around the Atomic Bomb Dome and renewed their pledge to promote a peaceful world.

The ceremony began at 6 o’clock in the evening. Representatives from each organization offered water and laid wreathes of flowers at the monument in front of the A-bomb Dome, then all the participants made a silent prayer. Sunao Tsuboi, chair of the Hiroshima Prefectural Confederation of A- and H-Bomb Sufferers Organizations, addressed the participants, saying, “For the A-bomb Dome, which stands in silence, let us appeal strongly to the whole world for the abolition of nuclear weapons.” The participants of the ceremony also adopted a pledge to expand the circle of solidarity and continue making efforts, together with the appeal of the A-bomb Dome, to advance lasting peace in the world.

The Atomic Bomb Dome was designated a UNESCO World Heritage site on December 7, 1996, making next year the 20th anniversary of that designation. The Liaison Conference is planning to form an executive committee to hold a memorial event to mark the occasion.