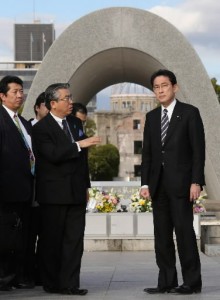 Making preparations for the meeting of foreign ministers that will be held in Hiroshima next April prior to the Group of Seven (G7) Summit (Ise Shima Summit) in May, Japanese Foreign Minister Fumio Kishida visited the Grand Prince Hotel Hiroshima, a candidate site for the meeting, and the Peace Memorial Park in Naka Ward on December 14.

Mr. Kishida compared different rooms at the hotel that would suit a small meeting. In front of the Cenotaph for the A-bomb victims at the Peace Memorial Park, he checked how a sequence of activities would change if an offering of flowers and photo-taking were included in the schedule, together with Yasuyoshi Komizo, the chairperson of the Hiroshima Peace Culture Foundation, and Shinsuke Sugiyama, the Deputy Minister for Foreign Affairs. They also visited the Peace Memorial Museum.

Afterward, Mr. Kishida told reporters at the International Conference Center Hiroshima that he wanted to make use of a framework for the meeting of foreign ministers, which will be attended by both nuclear and non-nuclear nations, and proceed with realistic and practical efforts to advance nuclear disarmament.

The Japanese government has received word that foreign ministers from three nuclear nations, the United States, the United Kingdom, and France, will take part in the meeting and pay a visit to the Peace Memorial Park.