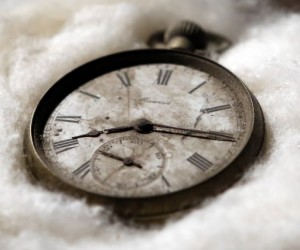 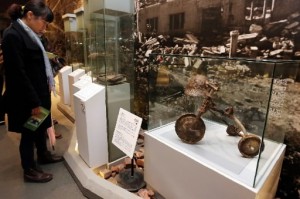 It was learned on December 10 that the short hand of a pocket watch that stopped at precisely 8:15 a.m. on August 6, 1945, the time of the atomic bombing of Hiroshima, and has been on display at the Hiroshima Peace Memorial Museum, has broken. Museum staff believe that the damage is due to the deterioration of the aging artifact and have now replaced it with a replica. As 70 years have passed since that day, the condition of other artifacts on display or in storage are inexorably deteriorating, too. The museum is now facing the difficult task of maintaining these items.

The pocket watch, four centimeters in diameter, was the possession of Kengo Nikawa, who was 59 at the time. He experienced the atomic bomb at a location 1.6 kilometers southwest of the hypocenter and eventually died on August 22. The glass covering and the chain are missing. The watch was donated to the museum by Kengo’s son, Kazuo, in 1975. It had been exhibited near the entrance of the main building, next to the mannequins that depict A-bomb survivors wandering through the devastated city in the aftermath of the bombing. The watch also appears on the front cover of a photo book about collections of the Hiroshima Peace Memorial Museum that was published by the museum in 1999.

According to the museum, a staff member cleaning the facility noticed that the metal hand of the watch was broken. The museum then obtained approval from Mr. Nikawa’s family to replace the watch with a replica made in 1996. However, because the replica was being used in the A-bomb exhibition tour of U.S. cities, including Washington D.C., from June of this year, it took the place of the original watch on November 13 after the exhibition tour ended. The original watch was then moved to the museum’s storage room.

The museum holds approximately 20,000 original items and materials which once belonged to A-bomb victims, and currently exhibits 420 of these artifacts. The temperature and humidity of the storage room is closely monitored and the intensity of the light in the exhibition rooms is kept low. Despite these efforts, the condition of the items on display and in storage, which were already damaged in the bombing, are deteriorating rapidly due to aging: the metal parts of stored artifacts have rusted and photos and papers are fading.

Since 1996, the museum has produced replicas of 21 items, including a charred lunchbox and tricycle, and has performed other reinforcement and preservation work. However, these measures were last carried out in 2006 and such work has not been pursued since then.

Kenji Shiga, the director of the museum, said that measures to prevent the deterioration of the A-bomb artifacts must be urgently undertaken in order to pass on the reality of the damage caused by the atomic bomb. The museum will explore storage practices and exhibition methods that can reduce this deterioration.