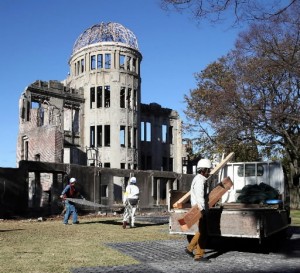 On December 14, the City of Hiroshima began its first seismic reinforcement work on the Atomic Bomb Dome, the building located in Naka Ward that has been designated a World Heritage site. Fearing that the A-bomb Dome could collapse if an earthquake up to a level 6 intensity struck the area, the city has decided to fortify the brick walls with structural steel at three locations inside the building.

For 70 years the A-bomb Dome has stood as a silent witness to the tragedy of the atomic bombing. While necessary for its preservation, the reinforcement work must not undermine its dignified appearance and atmosphere. Measures to shore up the quake resistance of the heavily damaged building will be made at two locations on the north side and at one location on the south side of the wall on the third floor, all of which are vulnerable to internal and external tremors. Structural steel (1.6 meters to 7.4 meters in length) will be added to the supports which were implemented during the previous preservation work.

Starting at 8:30 a.m. that day, about 10 workers from a subcontractor removed a section of iron fencing that surrounds the A-bomb Dome site and carried in construction materials. They laid plastic boards over the rubble to create a working area. When the work is fully under way, the dome will be shrouded in scaffolding and safety nets from January 5 to the end of next March.

The City of Hiroshima pursued reinforcement work with steeling framing and other preservation efforts in 1967, 1989, and 2002. The work this time is based on the results of an assessment conducted in 2013 which involved a seismic-resistance evaluation. Some experts backed a larger-scale measure, like the base-isolation method. However, the city decided to undertake the minimum amount of intervention necessary so the external appearance of the dome will remain little changed while the building will still be able to withstand an earthquake of up to 6 on the seismic scale, in line with Geiyo earthquakes which occur in the western part of Hiroshima Prefecture as well as Ehime Prefecture.

Yoko Morino, 63, a housewife from the city of Nagoya who was visiting the Peace Memorial Park for the first time in 30 years, said that she was surprised to see that the dome has deteriorated more than she imagined and she expressed hope that the reinforcement work will keep it secure for many more years to come.